Tom Clancy’s Splinter Cell: Blacklist is an action-adventure stealth game published by Ubisoft. It is the sixth installment of Tom Clancy’s Splinter Cell series and is the direct sequel to Splinter Cell: Conviction. Blacklist introduces a new gameplay mechanic called Killing in Motion, allowing the player to highlight targets and take them out in quick succession while on the run. The game is set in a third-person perspective so the protagonist and the objects around him are visible. As well, there is voice integration with Xbox 360’s Kinect peripheral, which allow players to say things to distract enemies and then attack. The player can also use the Kinect sensor to control the protagonist with their body instead of the Xbox 360 controller. In the Wii U version, the Gamepad controller’s touchscreen acts as an interface to access gadgets and other features from the protagonist’s arm-mounted computer, or OPSAT. It also incorporates the screen and motion controls to highlight enemies through thermal vision when using the Killing in Motion mechanic. Wikipedia®. 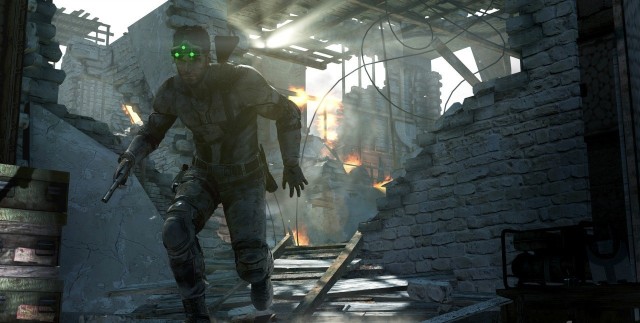 Sam Fisher’s return as the head of Fourth Echelon sees the return of the series’ cinematic mood, with mechanics such as Mark and Execute. While the E3 stage demo showed the return of familiar characters such as Anna Grimsdottir, Sam is noticeably not voiced by Michael Ironside. Among the new gadgets in Sam’s arsenal are electrocuting bolts, as demonstrated by Sam firing into a puddle to incapacitate two guards. The new game will incorporate Kinect voice controls for the Xbox 360 version to allow the player to attract a guard’s attention or call an airstrike. Sam will now also be able to customize his weapon loadout and mix and match different pieces of armor to allow for a more custom gameplay experience. The mark and execute feature from Splinter Cell: Conviction will return and is now improved by allowing the player to stay mobile during the execution phase.