Skip to content
Home » Music » Roméo Testa – I’m So Down

Roméo Testa – I’m So Down. Roméo Testa has that rare voice that can seamlessly blend rock, blues and soul into one potent pop music package. At 19, he is already a music business veteran and released his debut six-song EP on Columbia Records on May 6. This teenaged prodigy, born in Costa Rica, was raised in Los Angeles, where he received a well-rounded musical education from his Panamanian/Italian/Chinese father and Mexican/Irish/German/British mother. “I grew up on a pretty healthy diet of music,” he says, his prominent cheekbones and dark good looks making him a cross between the young Elvis Presley and Bruno Mars. “I started out with the Beatles, then evolved into Buddy Guy and Muddy Waters before turning to John Mayer. These days, most of what I listen to is hip-hop — old-school Dre and Dirty South stuff. I always try to get some of those sounds in there.” Executive produced by Dan Wilson, The End offers that same kind of musical diversity. “The Hardest Part” has the melodic warmth of Coldplay laced with a trip-hop drum and bass beat. The song is dedicated to Testa’s older brother, who died from bone marrow cancer at 10, just a year older than Roméo was at the time.

“It’s the most honest thing I’ve ever written,” he explains. “His memory lives on with me. I pray to him before every single show and thank him after it’s over. Good or bad, I’m doing this for him and what he stood for in my life. There’s not a day that I don’t think of him.” The blue-eyed soul of the cheeky “I’m Down” is Testa’s double-entrendre retort to a girlfriend set to leave him. His cover of For King and Country’s “Light It Up” has the anthemic feel of Peter Gabriel’s “In Your Eyes.” “The song feels like it was written for me,” he says. “I felt in tune with the part about letting go of your inhibitions, knowing it’s going to be OK because you have people who love you.” A gospel organ underlines the spirituality of “Still Misunderstood,” a song Roméo dedicates to victims of bullying. A loner himself, Testa insists, “We’re all the same, whether we’ve born into the richest of families or a life of hardship.” His hip-hop influences are hard to miss in “Wish Me Well,” a song about leaving loved ones to pursue your dreams, with a soulful feel that recalls Terrence Trent D’Arby. “Well you probably think I’m crazy,” he sings, “But when you grow up in L.A./All you see is sunshine/You want to feel the pouring rain.”

While recording in London, he wrote “With You” about his experience getting lost on the bus on the way to Hyde Park. It’s a tender love song that echoes the likes of John Mayer by way of Al Green and Otis Redding. Testa has been pursuing his muse since starting to play violin at 7 years old, encouraged by the Harmony Project, which provided funds for inner-city musical education in the Los Angeles public school system. By 11, he was writing songs in his bedroom with an electric guitar and cutting them on a TASCAM tape recorder, both given to him as birthday gifts from his father. Roméo went on to study viola at the prestigious Interlochen Music School in Northern Michigan. He remembers the first time he juxtaposed the political and personal in a song called “Hey Ma’am,” inspired by his mother taking him to a San Francisco rally against the dropping of uranium bombs in the Middle East. “The song was about my stepbrother and the plight of the world,” says Roméo. “It’s kind of an anti-war protest song, about Uncle Sam coming to the door to tell you your son died. My outlook wasn’t as sophisticated back then, but I definitely knew something wasn’t right. If there’s one thing I’m clear about, it’s opposing injustice.” 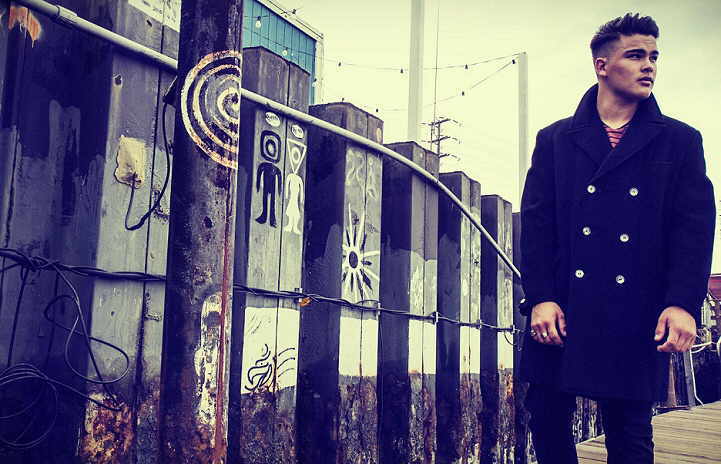 Signed to a record contract on the strength of a single song, “The End,” which is not included on the EP, Testa immersed himself in creating music over the past two years. Now, he’s turned his attention to performing those songs before live audiences. “I want to earn everything I get,” he says. “I never expect anything to come easily. If I want my career to have credibility, I have to develop a fan base through my live performances.” With The End, Roméo is taking his first tentative steps in what he hopes will be a lifetime career. “I’ve been waiting for this moment my whole life,” he explains. “I’ll be honest: I’m a little nervous, but who wouldn’t be? I’m just excited and I couldn’t be more ready. This EP represents me as a person and a musician, my taste in music and everything I want to stand for. “It’s all the stuff I’ve learned and all the people I’ve had the chance to work with. I feel like I’ve spent the last few years doing nothing but music in this magnified environment. I can’t stress how far I’ve come.” For Roméo Testa, The End is just the beginning.

Roméo Testa – I’m So Down Lyrics: