Quiet Hollers are a cult/gang/band from Louisville, KY formed semi-accidentally in 2010 following an album release party for which the band was recruited. In 2013, the band’s debut album I Am the Morning, a “reverb-soaked dive into the stream-of-consciousness confessionals” (No Depression) of singer/songwriter Shadwick Wilde featured a drummer whose neck was literally broken– the band refusing to postpone their session at the since-defunct Funeral Home studio of analog guru Kevin Ratterman (Murder By Death, Andrew Bird, My Morning Jacket) after a waterfall-diving accident. 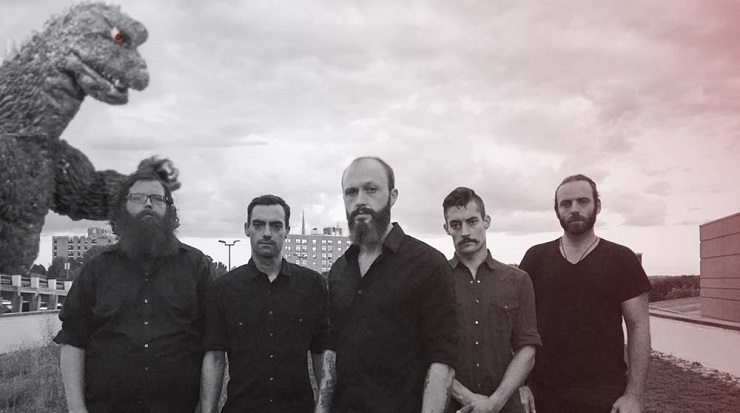 Although the album was received with polite applause from the European blogosphere, and a smattering of indie music writers for whom it was a “Best of 2013,” it flew mostly under the radar in the band’s hometown of Louisville, KY despite rotation on WFPK and a nomination for best album in the inaugural Louisville Music Awards.

Booking a slew of tours across the eastern half of the US (often using connections from Wilde’s days as guitarist-for-hire for seminal Dischord Records band Iron Cross), Quiet Hollers produced their sophomore full-length without label support… relying instead on a small but dedicated cult following who funded nearly the entire project. Released in October 2015, “Quiet Hollers” runs the proverbial gamut of the band’s eclectic influences to deliver literate, hook-laden narratives, blasting through tube amps in swirls of violin and piano. Consequence of Sound called it a “beautiful portrait,” breaking the “confines of roots music,” and PopMatters deemed the album “wonderfully unique,” with a “strong post-hardcore influence.”

Quiet Hollers: Mont Blanc Lyrics:
I know I planted those seeds down too deep
they’ll die and never see the sun
my fault for that one
I was a city boy before
no excuses anymore
I’ll try to learn and to keep us fed
shed a tear for the books I shoulda read

and I’d seen all the warning signs
on the TV, in the Times
but I had you to hold at night
and so it took me by surprise
we had so many things back then
I had a silver Mont Blanc pen
I’d write for hours about nothing
that makes any difference now

shed a tear for the books I shoulda read