The soul singer and songwriter based in England known as Myles Sanko released his debut EP record album, titled, “Born in Black & White,” to broad critical and fan acclaim in 2013. The album consists of seven original funk and soul tracks written and performed by Myles, himself, for a total playing time of approximately 22 minutes. The record is composed and played in the style of soul greats such as Bill Withers, Otis Redding, Al Green and James Brown, all of whom Myles names openly and proudly as his main musical influences. A stop-to-finish work of deep grooves and jazzy musical perfection, “Born in Black & White” is certain to be the first in a long line of remarkable and wonderful solo releases from Myles to come. Dubbed as the lovechild of soul music, Myles Sanko began his music career by singing and rapping alongside disc jockeys in nightclubs. He has fronted popular bands such as Bijoumiyo, plus working with funk kings Speedometer who were touring with James Brown’s 35 years soul sister Ms Martha High. “My intention,” writes Myles, “is to produce music with a feel good vibe and lyrical content that makes my listeners think.” In order to select an appropriate collection of compositions for professional recording in the studio, Myles uploaded live videos of himself giving acoustic performances to the internet. He then invited his bevy of fans throughout Europe to give their opinions regarding which tracks would best fit his debut EP release. This interactive spirit, which has guided Myles’s solo career to date, reveals much about his humanist spirit, genial character, and artistic integrity. “I want my music to be a place to feel alive,” says Myles Sanko. “True motivation is the reaction I get from my audience when I perform, and I intend on making music that I love listening to. It’s the only way to stay authentic and to not lose yourself in all the other musical influences out there.” With his eight piece band Rick Hudson (drums), Neil Cowlan (guitar), Tiago Coimbra (bass), Tom O’Grady (piano/Rhodes), Neil Penny (trumpet), Matt Mckay (saxophone/flute), Tom White (trombone) and Ric Elsworth (percussion) Myles Sanko 10 versatile compositions Myles wrote with his longtime songwriting partner Thierry Los from France. Styles are ranging from the melodic soul-jazz oft he title track „Forever Dreaming“ through the spiritual acid jazz of „Take A Look At Me Now“ to the energetic soul dancer „Shooting Star“. “Forever Dreaming” is released P-Vine Records (Japan) and Légère Recordings (Europe), accompanied by a UK and small European tour to spread the good word. 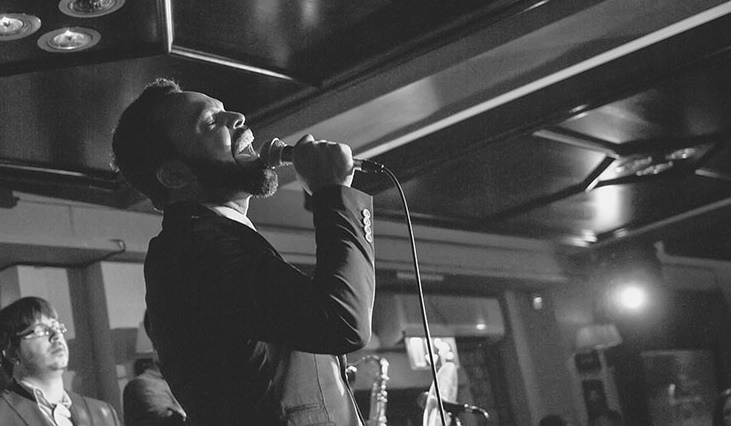