Honeyblood are the Glasgow-based two-piece of Shona McVicar on drums and Stina Marie Claire Tweeddale vocals / guitar. Despite their fledgling status and minimal set-up, the duo’s song writing is fully formed, perfectly assured and far from spartan. With nothing extraneous, their music is driven through neatly filled and balanced instrumental structures and the sheer strength of Stina’s vocal. The songs resonate with deep hooks and the kind of effortless charm that’s been praised among recent releases from Best Coast, Haim and Frankie Rose while also tapping into the swooning, strident delivery of more established artists like Jenny Lewis. And while those are all great touchstones for their breezy debut single, the band also claim the darker currents of PJ Harvey and The Breeders / The Throwing Muses as influences, citing their strong riffs as inspirations for beginning Honeyblood. Since their formation in early 2012 the duo have supported acts including Sleigh Bells, Crocodiles, Palma Violets and Deap Vally, played shows for the likes NME and Vice, as well as festivals everywhere from Brighton’s Great Escape to Talinn’s Music Week; but they started out with humble beginnings putting on a show themselves at The Old Hairdressers in Glasgow to release their debut two-track cassette ‘Thrift Shop’ on CATH Records. Honeyblood have rapidly ingrained themselves into a Glaswegian scene that they describe as “a lot of bands branching out from the usual genres and just writing excellent tunes – It’s great to feel a part of that.” It was at that early show that FatCat first stumbled upon the band and their signing continues the Brighton-based label’s strong run of picking up on the best new Scottish talent at a nascent stage. Honeyblood follow on from The Twilight Sad, Frightened Rabbit and We Were Promised Jetpacks – all of whom were found from demos or early performances. 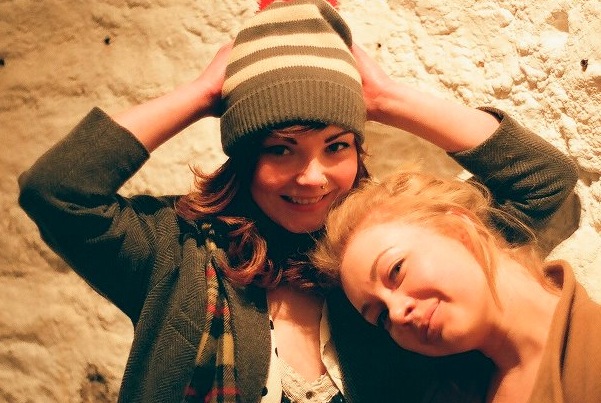 On ‘Bud’, the band’s first vinyl release and debut for FatCat, their bittersweet pop has been captured to tape by Rory Atwell. These first two tracks are just the tip of the iceberg with plans for a Honeyblood full length already underway. Asked what they hope listeners to take away from Honeyblood’s music the pair answer, “For more girls to start playing guitars and drums, sing songs and have fun.” There could hardly be a better offering to help inspire young bands to pick up the sticks and strings and do it themselves than this debut. With a buzz of expectation emerging around them already, you can expect big things from them in the next year.

Honeyblood – Bud Lyrics:
My problems seem to stamp
From the little seeds I plat
I try to stop I can’t
It’s not in my nature
Nip it in the bud
They don’t make it hurt enough
Dead in his tracks
When I finally think I’m never going back
They begin to flower