Rose Windows is a psych rock band from Seattle, WA, formed by songwriter Chris Cheveyo in the fall of 2010. On June 25, 2013, Rose Windows released their debut album, The Sun Dogs, for Sub Pop Records. 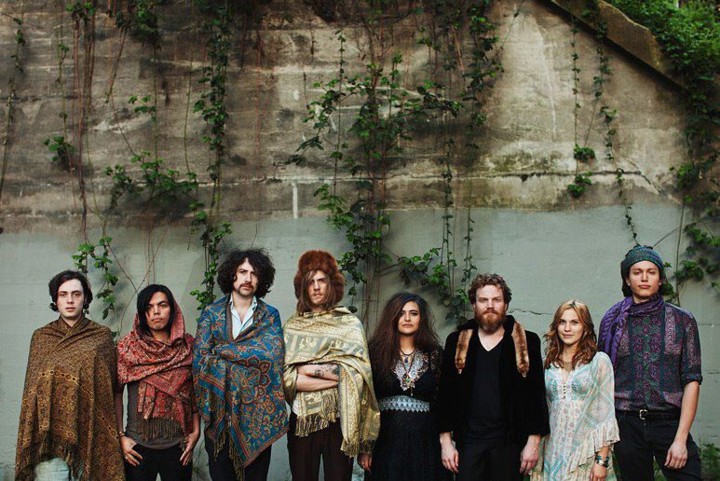 The band follows standard Western traditions in their instrumentation, using the basic tools employed in past decades of American and British rock music. Elements of The Band’s folk-infused rock, The Doors organ-driven psychedelia, and Black Sabbath’s blues-based dirges can be heard in Rose Window’s debut album The Sun Dogs.

Rose Windows was started by Chris Cheveyo in the fall of 2010 in the Central District of Seattle, WA. The project began with a few rough demos done alone at home and slowly began to take shape as the band amassed members. Bandmates were primarily friends of Christ Cheveyo. Rabia Shaheen Qazi began provides vocals, David Davila performs on piano and organ. Former bandmates of Cheveyo, Nils Petersen and Pat Schowe were enlisted for electric guitar and drums. Richie Rekow and Veronica Dye play bass and flute respectively.

Rose Windows – Heavenly Days Lyrics
Listen while you read!
Adorn by miles and years
like paths carved in faces by tears
the sun in rear windows
and 60 while the wind blows
the serpent coils around these old fears
oh these feel like heavenly days
the home and the view will fade out
February is burning in the South
the stars are all diamonds
through red hills and green islands
the scene dances swift through her hair
oh these feel like heavenly days