Gears of War 4 is a third-person shooter video game developed by The Coalition and published by Microsoft Studios for Microsoft Windows and Xbox One. It is the fourth main installment in the Gears of War series, and the first entry not to be developed by Epic Games. The game was released worldwide on October 11, 2016. Upon release, the game received generally positive reviews, with critics praising the game’s combat, visuals and set pieces, while criticism was directed towards the single-player campaign and writing. Many gameplay elements from the previous games are reintroduced, along with new elements such as the Dropshot weapon that fires explosive drills and the Buzzkill that fires ricocheting sawblades at enemies. Players can also perform a short distance shoulder charge, knocking enemies off balance and enemies can also pull players out of cover and perform their own takedowns. The game features 4 categories of weather: from heavy breeze (trees, leaves, dust kicking up) and grow into violent category 3 windstorms that can affect combat and weapon usage. Wikipedia®. 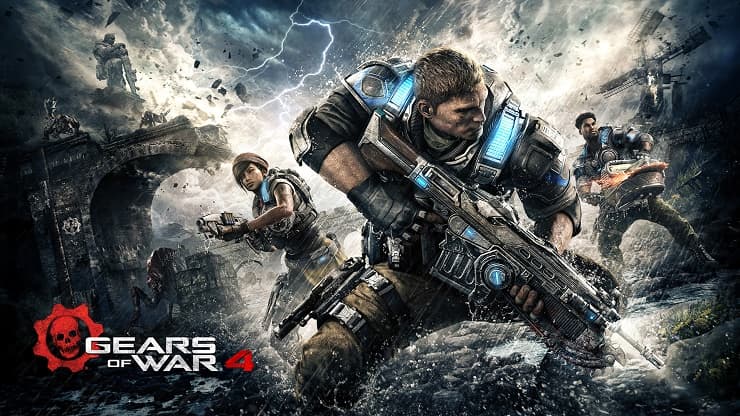 A new saga begins for one of the most acclaimed video game franchises in history. After narrowly escaping an attack on their village, JD Fenix and his friends, Kait and Del, must rescue the ones they love and discover the source of a monstrous new enemy. Never Fight Alone: Enjoy two-player co-op campaign with friends locally via split-screen or over Xbox Live. Horde 3.0: Team up with four others and battle wave after wave of increasingly difficult enemies by choosing your combat class, leveling up your skills and deploying fortifications anywhere on the map. Explosive Versus Multiplayer: Compete online in new and favorite game types, all at 60fps on dedicated servers. A new visible ranking system means fairer matchmaking for social, competitive and professional players alike. Redefined Cover Gameplay: New weapons, close-cover combat moves and combat-knife executions turn each piece of cover into an offensive opportunity.