Final Fantasy XV is an open world action role-playing game where players take control of main protagonist Noctis during his journey across the world of Eos. While accompanied by his three companions Gladiolus, Ignis and Prompto, Noctis is the only character directly controlled by the player: he can navigate through simple movement, jump over small obstacles, sprint for a limited time, and perform context-based actions such as taking cover behind objects. The kingdom of Lucis is a large connected landmass that can be explored on foot, by using the party’s car “Regalia”, or chocobos, recurring galliform birds in the Final Fantasy series.Both the Regalia and chosen Chocobos can be customised by the player, and Chocobos can join in battles if their connection to the characters is strong enough. While Chocobos are controlled manually, the Regalia can be either manually or automatically controlled. The party can also fast-travel to areas unlocked on the world map. The Regalia must be refueled periodically at petrol stations. In towns the party can visit, there are inns and hotels where they can stay, shops where items and equipment can be purchased with the in-game currency gil, and local tipsters, non-playable characters (NPCs) who provide information on quests, from main story missions to side quests. Side quests are also available from individual NPCs found in towns. During some story sequences, dialogue choices appear for Noctis, with the selected option altering the response from NPCs. The game also contains two difficulty modes, with players being able to switch between the two. Wikipedia®. 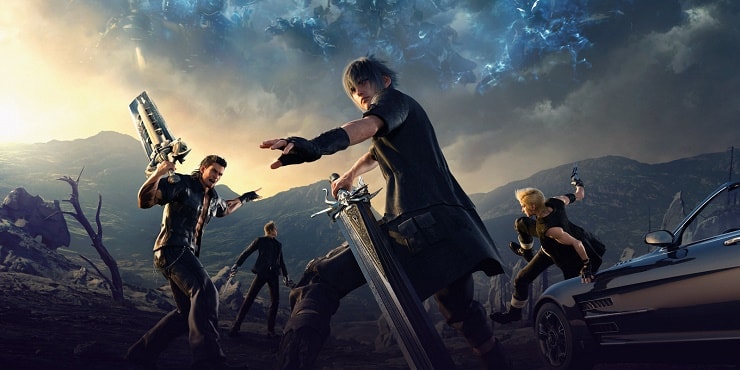 Final Fantasy XV is the fifteenth main installment in the main Final Fantasy series. The game was released worldwide on November 29, 2016 for the PlayStation 4 (supporting PlayStation 4 Pro, but optimized for the standard version) and Xbox One, with other release platforms announced. It was directed by Hajime Tabata, but began development under Tetsuya Nomura, who provided character designs for the main cast, with the soundtrack composed by Yoko Shimomura. Final Fantasy XV is the first action role-playing game in the main series, and the first single-player Final Fantasy game to be released with the “games as a service” model, receiving numerous free updates as well as paid DLC and seasonal events. The story is told over the course of 15 chapters. It focuses on Noctis Lucis Caelum, a prince from the kingdom of Lucis who fights to reclaim his throne and must go on to fulfill a greater destiny. Final Fantasy XV aims to examine its characters’ humanity and place them in a more realistic setting than most Final Fantasy games. Its prominent themes are friendship, destiny, and legacy. The gameplay features an open world environment and makes use of the Active X Battle system, a real time battle system. The first half of Final Fantasy XV is open world, traversable with the Regalia and chocobos, and enables players to take on a variety of quests, explore, and play minigames. Objectives later become more specific, in accordance with other Final Fantasy titles. In the original release, only Noctis was playable, though patches have allowed players to switch between controlling any of the four main characters while in battle in the open world.