Brighton, UK based Fear of Men, first introduced in the US via 2013′s much praised singles compilation “Early Fragments,” presented their much anticipated debut album “Loom” for release in April 2014 and has just announced Fall Forever for release June 3, 2016 on Kanine Records. After extensively touring in support of their acclaimed debut album, 2014’s ‘Loom’, Fear of Men decamped in the early months of 2015 to an outbuilding of a disused abattoir in rural Kent, England, to begin work on new material. Such an environment was fitting for a band determined to strip their sound back to the bone and build it up to make an album that would, on their live return, “make the stage shake”. Fear of Men is Jessica Weiss (Guitar & Vocals), Daniel Falvey (Guitar), Michael Miles (Drums, Keys). 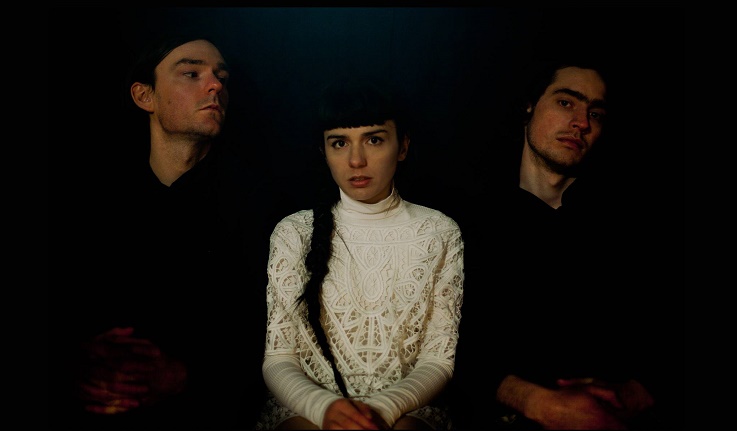 Speaking to Noisey about the track, the band’s Jessica Weiss describes the sense of trauma tackled here as: “the undefinable anxiety and damage that all of us suffer at some point at the hands of another. It’s how we deal with it that defines us…To me, dealing with trauma is not about looking back, it’s about taking that experience and putting it under your own control, letting it become a part of you.” For her, the song is about “empowerment through taking control.” Brighton’s Fear of Men return on June 3rd with their second full-length album, Fall Forever, via Kanine Records worldwide. Building upon the melodicism and immediacy of their acclaimed debut album, Loom, Fall Forever takes the three-piece – comprised of Jessica Weiss, Daniel Falvey and Michael Miles – in a bold and modern direction, pushing the limits of their instruments to take on new and alien forms.

Fear of Men: Trauma Lyrics:
You give me trauma
You give me more than I can bear
I rise above you
I burn my body on the fire

There’s a chain of scenes that repeat in my dreams
In the dark my power overflows
Do you crawl to your church?
Do you need something else like a meaning beyond this world?

Oh I’m the sun, the rain
Oh I’m not for you
Oh I am always apart
Oh I flow through you, I could crash through you
I know you