Teenage Mutant Ninja Turtles: Mutants in Manhattan is an action hack and slash video game based on the Teenage Mutant Ninja Turtles franchise, developed by PlatinumGames and published by Activision. It was released for Microsoft Windows, PlayStation 3, PlayStation 4, Xbox 360, and Xbox One on May 24, 2016. The game is an action hack and slash game with cel-shaded artstyle, in which players control the four titular characters, including Leonardo, Donatello, Michelangelo and Raphael, from a third-person perspective. Different characters have different abilities and powers, as well as different fighting styles. Each turtle also has their own ultimate ability. For example, Leonardo can slow down time, and Michelangelo can perform cheerleading, which reinstate the cooldowns of other turtles’ abilities. Players can shift between turtles at will in the single-player campaign. The turtles can perform successive attacks to create a combo. The four turtles also have the ability to parkour and use parachute while traveling around the game’s world. Players encounter numerous green orbs in the game. These orbs, also known as Battle Points and can be spent to upgrade the turtles’ abilities. The turtles can also scan their surroundings and tag enemies. The game is divided into different stages. In each stage, players encounter random enemies before reaching a boss. When the player character is killed, other turtles (controlled by artificial intelligence in the campaign or by other players in the multiplayer) can help revive the players. If the turtles are not revived, they will be sent back to the subterranean lair. A mini-game will then begin, tasking the turtle to eat pizza as fast as possible. The game supports four-player online cooperative multiplayer. Wikipedia® 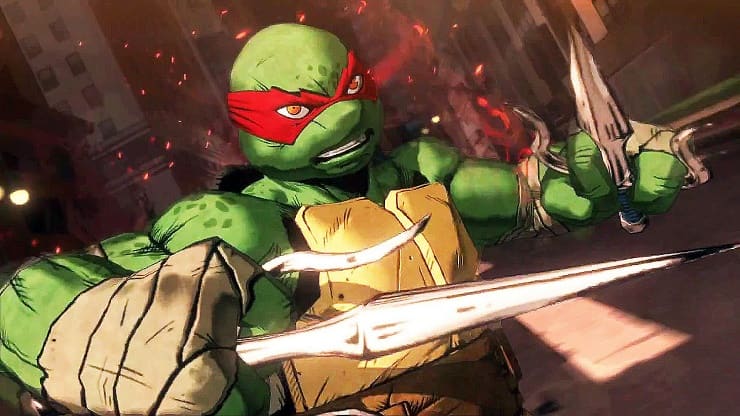