Fairy Fencer F is a 2013 fantasy role-playing game under Compile Heart’s Galapagos RPG brand for the PlayStation 3 and Microsoft Windows. The game uses a modified version of Hyperdimension Neptunia’s battle system. The PC version was released on August 4, 2015. An expanded version, titled Fairy Fencer F: Advent Dark Force, was released in Japan in 2015 for the PlayStation 4, and was released worldwide in 2016. For the most part up till the first Goddess Revival it has the same story from the PS3 version with additional scenes such as Ethel and Apollonius appearing sooner, Sherman’s past being explained as to why he hates evil so much and, how he fell in love with Tiara. The Goddess route is relativity the same as the PS3 version. Tiara gets murdered by an unknown attacker, and Fang’s grief causes his wish to go back in time before Tiara was killed to be granted. However it seems he wasn’t the only one to go back in time with Eryn now. Sherman and Ryushin went back with them but got seperated, as Sherman becomes a cold and ruthless young man after Tiara’s death having quite the impact on him and is still the main antagonist. This route was expanded as filling plot holes from the PS3 version and giving more spotlight towards Ethel and Karin. 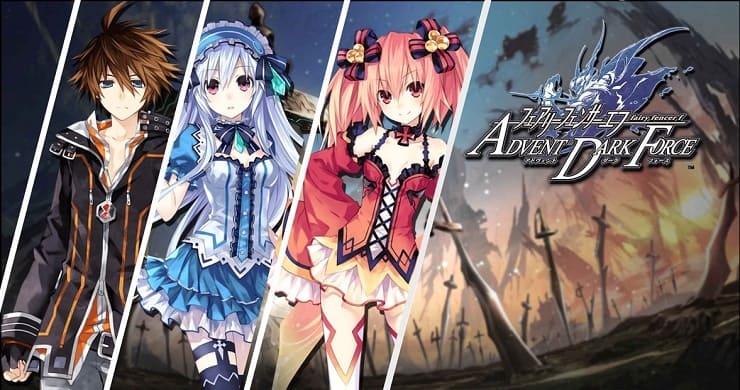 The Vile God route has Sherman and Eryn as the main protagonists after Fang accidentally assisted in the revival of the Vile God and the party failed to stop the Vile God, they were sucked in a portal with Sherman and Eryn being the last ones. When Sherman comes to he finds himself at the Sol Plain with Eryn and Ryushin they agree to explore and see if they could find anyone else. They come across Tiara who much to their shock has a Fang-like attitude as well as bullying the hoodlum bandit that attacked her in the first timeline and are forced to engage battle with her, Sherman defeats her and she runs away. They head to the Sunflower Inn to ease up and find out any information they can. Sherman shows Eryn a newspaper telling her they went back in time and agree to search for Fang while gaining unexpected allies along the way like Ethel and Apollonius. While their former allies are now working for Dorfa or a bounty hunter in Pippin’s case. After much searching they finally found Fang while they were disguised and infiltrated a party held by Dorfa, but one of their worst nightmare came true as Fang is now the president of Dorfa. They encounter Tiara again and using his quick wits and his wealth, Sherman manages to recruit Tiara onto their side so he could keep an eye on her. Wikipedia®.