Dishonored: Death of the Outsider is an action-adventure stealth video game developed by Arkane Studios and published by Bethesda Softworks. It is the third game in Dishonored series, following Dishonored 2, and was released 15 September 2017 on Microsoft Windows, PlayStation 4 and Xbox One. It follows former-assassin Billie Lurk as she finds her mentor Daud and aids in his quest to kill the Outsider, a supernatural being who bestows magical powers on a select few. The player has access to supernatural abilities, which cost energy to use; this energy regenerates to full over a short amount of time. Unlike previous games in the series, these abilities are all unlocked at the same time. Lurk’s main mobility power is “Displace”, which allows her to set a marker in the world. The player can then teleport to it at-will at any time. Among other things, she is able to steal the faces of NPCs to blend in. During missions, the player may pick up optional “Contracts” at black markets, which are side missions that involve doing tasks such as assassinating another character. In one example, the character is tasked with killing a mime and making it look like an accident. In addition to supernatural abilities, the player can use various gadgets and gear. One such gadget is the hook mine. The hook mine can be placed on any surface, including walls and ceilings, and will grab any enemies and pull them towards it. This can be used to non-lethally neutralise a target or hide a body, though two hook mines placed nearby to each other can rip NPCs in half (killing them). Completing the game unlocks an “original game plus” mode, where the player has access to the powers featured in Dishonored 2. Wikipedia®. 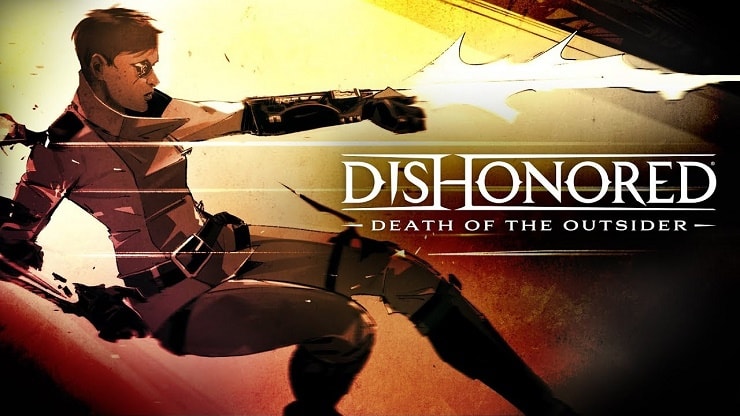 From the award-winning developers at Arkane® Studios comes Dishonored®: Death of the Outsider, the next standalone adventure in the critically-acclaimed Dishonored® series. Be a badass supernatural assassin and take on the role of notorious Billie Lurk as she reunites with her mentor Daud in order to pull off the greatest assassination ever conceived. Building upon Dishonored® 2’s signature gameplay and art style, Death of the Outsider features all the series hallmarks, including brutal combat systems, unique level design, and immersive storytelling that responds to your every choice. With compelling characters and exhilarating action, Death of the Outsider is the perfect entry point for those new to the Dishonored series, while delivering a significant expansion of the gameplay and world for longtime fans. STORY: Take on the role of Billie Lurk (aka Megan Foster), once one of Dunwall’s most notorious killers-for-hire. Reunited with your old mentor, the legendary assassin Daud, you undertake the greatest assassination ever conceived: killing the Outsider, a god-like figure whom Billie and Daud see as instrumental to some of the Empire’s most dishonorable moments. As you venture deep into the grimiest corners of Karnaca to uncover the mystery of the Outsider and his origins, you will face deadly opposition, ancient powers, and difficult decisions that will forever change the world around you.

Dishonored: Death of the Outsider Walkthrough