Command & Conquer: Red Alert 3 is a 2008 real-time strategy video game developed by EA Los Angeles and published by Electronic Arts. It was released on October 28, 2008 in the United States for Microsoft Windows PCs and October 30, 2008 in Europe. An Xbox 360 version was released on November 11. On January 21, 2009 EA officially announced Command & Conquer: Red Alert 3 – Ultimate Edition, the PlayStation 3 version which contains bonus material extra to that of the Xbox 360 and PC versions and released on March 23, 2009 along with the Mac OS version by TransGaming. The game is a continuation of the Red Alert games within the Command & Conquer series. Command & Conquer: Red Alert 3 – Uprising, a stand-alone expansion pack, was released for Windows in March 2009. It was offered via digital distribution. Like the previous entries in the Red Alert series, the game is set in an alternate reality from World War II, in which the Western Allies fought the Soviet Union. In Red Alert 3 the Soviet leadership, facing defeat, goes back in time to kill Albert Einstein and prevent his assistance to the allies, paving the way for Soviet domination in the present. However as an unintended consequence, a third world power, the Empire of the Rising Sun, is created and all three sides go to war. All three factions are playable, with the gameplay involving constructing a base, gathering resources and training armies to defeat other players. Each faction has a fully co-operative campaign, playable with an artificial intelligence partner or with another human player online. The game intersperses strategy missions with full motion video footage featuring an ensemble cast led by Jonathan Pryce, Tim Curry and George Takei as the leaders of the three adversaries. The game received mostly positive reviews, with reviewers citing the co-operative and multiplayer components as strengths, along with the enhanced role of naval combat compared to other real-time strategy games. Commonly cited weaknesses included aspects such as unit pathfinding. Wikipedia®. 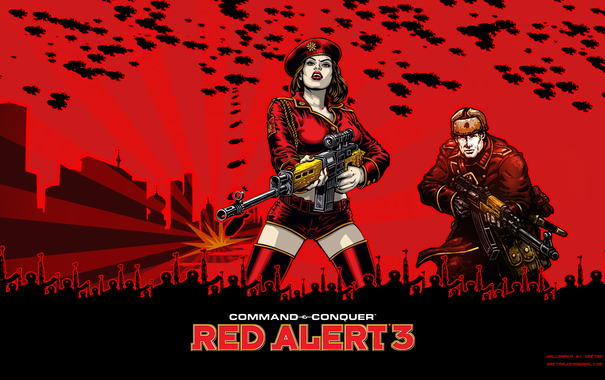