Democracy 3 is the third in the series of complex and deep political strategy games where the player takes on the role of President or Prime Minister, charged with the task of keeping the population happy, the economy booming and preventing society collapsing around them. Democracy 3 is the only game of it’s kind. Not an election-simulation, but a government-simulation, built around a custom-programmed neural network and unique iconic user interface that represents the thousands of simulated voters, pressure groups, policies, laws and statistics that make up a detailed model of a western democracy. As president, you decide what laws to set, which taxes to raise (or cut) which government programs to expand, introduce or cancel, whilst keeping one eye on the countdown to the next election. All political careers end in failure, and Democracy 3 is thus a game that cannot truly be won, only eventually lost. Democracy 3’s release comes at a curious time, when the US government is actually shutdown, the political parties engaged in a stalemate where passionately held arguments about the right to affordable health care, state-provision of public services and the need to balance a country’s spending against it’s income are in danger of bringing the US economy to the brink of implosion. There may not be any governing going on in Washington right now, but all the more reason for gamers to pick up where the politicians have left off. 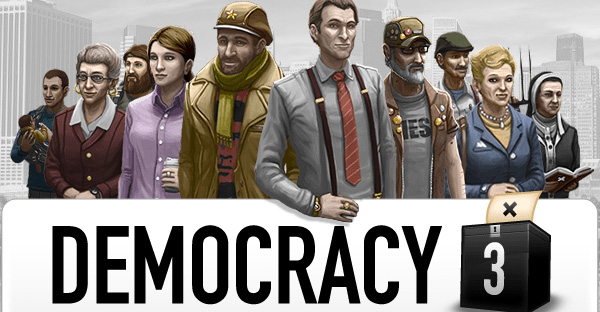 Democracy 3 Trainer (+3) Options:
Trainer for the stealth video game Democracy 3, you can use it to activate these essential Cheat Codes: Inf. Progress, Freeze Income, Inf. Political Capital. Note: This cheat tool is for the original version v1.14 of the game Democracy 3.