Cerebral Ballzy is a punk band from Brooklyn, New York, United States. The band was formed in 2008 and released their debut, self-titled, album on 26 July 2011. The album was released in full as an online preview on the Revolver Magazine website. Cerebral Ballzy are known for their love of 80s punk, along with a keen interest in drinking, girls, pizza and skateboarding. The band has received praise for their debut single Insufficient Fare and their energetic live performances. According to the lead singer, Honor Titus, the name Cerebral Ballzy came from a friend who dropped a slice of pizza on a train track and picked it up. Honor said “That was ballsy” and his friend replied “Cerebral Ballsy!”. The band has completed a tour of the US and played major UK festivals including Hevy Music, Sonisphere and Latitude. They played at the Summer Sonic Festival in Japan and the Reading and Leeds festivals in the UK in August 2011. Wikipedia®.

Here is the video from Cerebral Ballzy for their new track “Another Day”. The track is taken from the bands 7 inch The City’s Girl, which is out on Dave Siteks label “Federal Prism” on 17th September. Dave Sitek has also produced the new album. The band are over in the UK next week for 2 shows at the Old Blue Last in London before hitting up Reading and Leeds Festival. 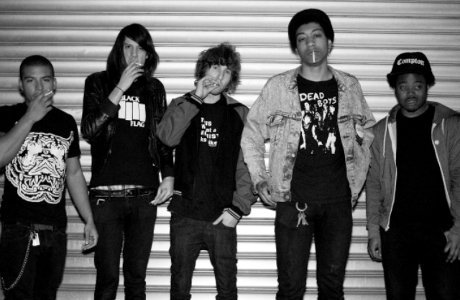