Bat for Lashes is the work of British singer/ songwriter, multi- instrumentalist and visual artist Natasha Khan. Combining influences that span decades, Natasha’s work dwells in the elemental, emerging in timeless forms. Natasha Khan first captured our imagination way back in 2006 with a set of distinctively haunting and rich, darkly phantasmagoric songs ripe with magic realism. Her sensual and gilt-decorated dream world was opened up in two Mercury Music Prize nominated albums, the atavistic, reverb-drenched Fur and Gold (2006) and 2009’s more electronically poppy Two Suns. The latter featured the irresistible Daniel – which won Ms Khan an Ivor Novello award for Best Contemporary Song – and was recorded in London and across America. 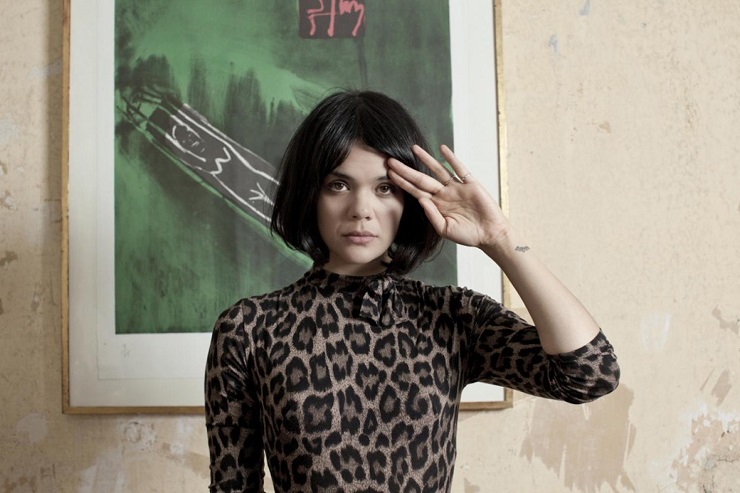 Bat for Lashes continues to win over the hearts of the nation having made a triumphant return last year with the highly acclaimed third album The Haunted Man. A richly layered and accomplished record, it pulls Khan’s distinctive creative vision into sharper focus, confirming her as a true innovator and an established UK artist. Khan has since been nominated for ‘Best Female at the Brit Awards and the beautiful track ‘Laura’, one of the 2012’s best, was nominated for an Ivor Novello for ‘Best Song Musically And Lyrically’, and was released as a limited edition 7” for this year’s Record Store Day. In September this year, Natasha Khan and Jon Hopkins announced a very special collaboration for the soundtrack to the upcoming British film How I Live Now, directed by Kevin Macdonald. The pair have written the beautifully sparse and atmospheric track ‘Garden’s Heart’ together, a haunting and fitting tribute to the film’s dark subject matter of a world war breaking out in 21st century Britain. In between her travels, Natasha lives in London.

With operatic drama, Natasha Khan has unveiled “In God’s House”, the spectacular and newest single from Bat For Lashes, one that billows with detail and soars with creative confidence. She’s also announced the release of her next album, entitled The Bride and due out on July 1st.

Wedding bells ring for Bat For Lashes on her new album ‘The Bride’. But don’t think for one second Natasha Khan’s taking a traditional route down the aisle. In contrast to the pure ‘I Do’, which announced her fourth album, ‘In God’s House’ turns tradition into something more ominous. Backed by uptight, stop-start synth notes (the likes of which define Wild Beasts’ similarly anxious ‘Present Tense’ album), Khan sings about the recurring feeling that “something’s wrong.” One minute in, those terse notes give way to a fluttering, open-ended refrain. Hope and optimism make a timely appearance, but it’s only fleeting. Within seconds, Khan is back to remarking on death, left alone. “My baby died on a beach” isn’t exactly the simple, loved-up vow a wedding-themed album might promise. Like the best of Bat For Lashes’ work, she flips convention on its head.