Take one look at Andra Day, with her saucy rockabilly-inspired look (she routinely rocks a bouffant and red-stained lip) and you know you’re in the presence of a unique individual. The San Diego-bred singer and songwriter’s eye-catching personal style complements her brassy, yet alluring voice, as well as her music, which is both groovy and bluesy. “I call it retro-pop-soul,” she says. “It’s a blend of jazz, soul, doo-wop, plus a little bit of rock, and a little bit of hip-hop on the underbelly.”

Andra Day says her influences come not only from the Motown records her father loved and the rock artists her mom favored, but also the jazz, doo-wop, and blues she was exposed to while attending the San Diego School of Creative and Performing Arts. ”During those years I fell in love with Billie Holiday, Nina Simone, Etta James, Lauryn Hill, and Janis Joplin,” she says. “Women with big voices who can really communicate the emotion they’re feeling when they sing. One of my favorite songs by Billie Holiday is ‘You Let Me Down’ because it’s so true. You can practically hear her crying on the record.” After graduating from SDCP, Day began working with various producers and posting clips of herself performing on YouTube. Stevie Wonder’s wife stumbled upon one of the clips, which she played for Wonder. The R&B legend called Day and said he’d love to work with her, a moment Day describes as “surreal.” Though the timing didn’t work out, Wonder introduced her to singer-songwriter/producer and hard rock pioneer Adrian Gurvitz (The Gun, Stevie Wonder, The Bodyguard soundtrack) who signed her to Buskin Records and they have been writing and recording for the past year. “Adrian has been in the music industry for decades and has worked with everyone from Jimi Hendrix to Whitney Houston,” Day says. “He brings experience and depth to the music and gives it a timeless feel.”

After holing up for eight months and writing an album’s worth of songs, Day and Buskin decided to post a series of covers on YouTube and see how the public would respond to her sound. Day’s jazzy, soulful takes on Muse’s “Uprising” and Eminem’s “Lose Yourself” were so well-received that a buzz began to build. Ellen DeGeneres called and offered to help the singer get recognized. It wasn’t long before a bidding war erupted between record labels. Everyone wanted to sign the statuesque beauty with the unforgettably angelic voice. 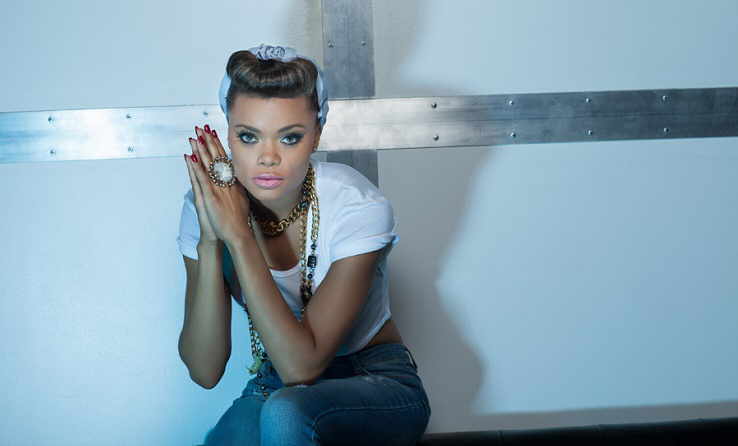 Day is now signed to Warner Bros. Records through Buskin’ Records, which will release her debut album later this year. Adorning her siren sound with uncompromising poetry, Day writes about the mistakes she’s made and the heartbreak she’s both caused and experienced. “They lyrics highlight the lessons I’ve learned,” she says. “My goal is to speak the truth,” she says. “It sets you free.” Excitement builds for the road ahead as andra day puts the finishing touches on her debut album. Reggae legnd ziggy marley joins andra on her first single, due out this fall. Andra’s voice, fun loving personality, image, and character are the makings of a star. Everyone who has worked with her knows that andra day is destined for great things. And soon the rest of the world will know, as well

Andra Day – Forever Mine Lyrics:
My heart has been a chessboard
Making moves and losing out
Played so many times before
And there ain’t nothing to brag about
Why this must be a new brew
When you caught him singing Blue Moon
You turn me all the way around
And I’m tired of the fine line

When there’s nothing I can sing now
That ain’t been sung before
But your love is a standout
So gon’ ahead and take the floor
You had to jimmy my heart
Now I’m stuck in your [?]
Pick me up, don’t ever put me down
Look I’m tired of the fine line

The way that you move, never seen it before
Lookin’ for my heart, can’t find it no more
You ransom my heart and I get that reward
Went in the ground like a trojan horse
Everytime
You got me shook like
Come out of nowhere, come mess with my life
I just want you to be forever mine