The birth of soul, hip hop and delta blues Sydney outfit, Yum Yum, is what one could describe as ordinary that led to an extraordinary exchange of musical minds. Some things do not require an explanation. It just is. In May 2014, a friend of a friend passed on a USB of Jayo James’ beats to Natalie Slade. A week later, Slade wrote to one of Jayo’s tracks, followed by a few jam sessions, sealing an instantaneous musical chemistry that explored funk, reggae, dub, hip hop and soul rhythms. 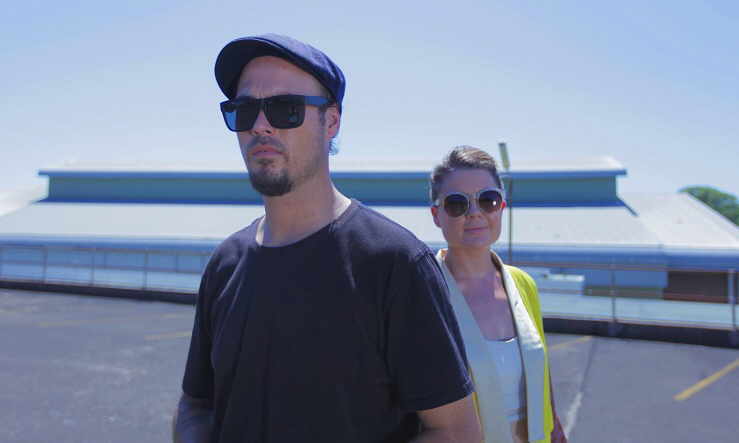 Born and raised in Sydney, Natalie Slade moved to Christchurch 8 years ago. Heavily influenced by Ella Fitzgerald and traditional jazz, Slade’s self-taught methods – her nuanced licks and chops, were developed at her father’s restaurant/jazz bar she managed in Christchurch. Upon losing the family bar due to the 2011 earthquakes, Natalie decided to write material and master the art of improvisation. Her distinctive husky tone and wide vocal range has seen her support @peace, Sola Rosa, Don McGlashan, The Blackseeds and Tahuna Breaks throughout the Christchurch festival circuit. Returning to Australia in 2013, Slade embarked on a music mission finding her feet amongst some of Sydney’s most experienced and well-respected musicians, building a fast reputation in the music industry.

Originally from the far south coast of NSW, Jayo has no formal musical training with the exception of Blues guitar as a young kid after which he immersed himself in hip hop, funk, soul and reggae. In his teens, he moved to Canberra and soon started DJing and event-managing parties throughout the city. Some years after becoming a father to twins, music continued to call on him putting together a popular monthly reggae/dub party which evolved into a 12 piece hip hop, funk and dub band called ‘The Rock Steady’. The Rock Steady has given Jayo the opportunity to focus on production and live performances throughout the Canberra festival circuit. With a production foundation influenced by the ideas and techniques of the great Dub engineers and motivated by Hip Hop’s innovation, raw skills and style, he treats sampling as a chance to create something new whilst paying homage to the past. Several extended stays abroad in the USA, UK, Europe and the South & West Pacific have greatly inspired and improved his musical ideas, knowledge and collection. As both a DJ and producer, Jayo has had the opportunity to support respected artists such as Katalyst, Hau, Hermitude, Oddisee, Houseshoes, Blu (Blue & Exile), Sidestepper (Colombia), The Red Eyes, Kingfisha, Lotek, D’opus & Roshambo, Spit Syndicate and Salmonella Dub amongst others.