London-based indie electro band Winters Island return after the huge success of their debut single ‘Ares’ with exhilarating new track ‘Fire’, out 24th March 2017, this will be the first track from their new EP ‘Hestia’ out 7th April 2017. The single is based on an individual using their alter ego in a time of emotional need and struggle. Speaking on the track Winters Island explain, “People spend their lives pretending they don’t have a facade. The track looks at struggling so much that that alter ego is the only thing that can get you through.” It begins with a simple guitar melody that gradually builds momentum as lead singer Andy Trimmer sings “can you heal me, can you feel me, as the fever spreads, like a fire” against intense electronic percussion and brooding piano chords. Trimmer demonstrates his commandingly emotive vocals which are second to none throughout this undeniably powerful track. 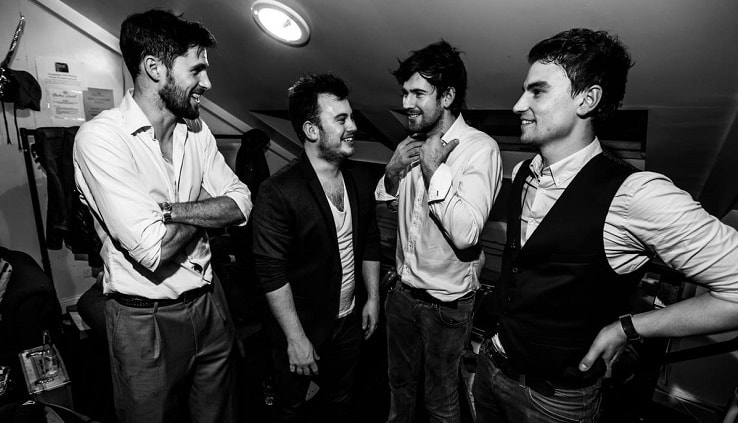 The accompanying visuals were shot by Greentea Productions in Kidderminster Town Hall, a location renowned for its musical history, hosting legends such as The Beatles and The Who. A dancer moves beautifully around the hall amongst scattered white chalk. The team worked tirelessly to ensure the emotion of the dancer was captured and the large amounts of chalk were controlled. The band wanted to make sure that the video portrayed the emotive nature of the song; each member produced affective performances with their instruments, to such an extent that the mic stand broke after Andy threw it to the ground.

The band, aka Andy Trimmer, Sam Thomas and Will Kay formed in 2014 after over a decade of collaboration. They have already received support from BBC London, BBC Radio 2’s Dermot O’Leary and Amazing Radio’s Gill Mills, whilst their debut video for ‘Ares’ premiered on The 405, was featured on MTV Iggy and was included in Myspace’s ‘Artist of the Day’ feature. The band’s impressive live shows have also seen them play sold out sets at KOKO, Proud and Borderline in London, as well as appearing at Kendall Calling and Brownstock Festival. ‘Fire’ by Winters Island is a powerful and invigorating taster for what’s to come on the band’s new EP ‘Hestia’ out 7th April 2017. An exciting statement on our need to hide behind facades, this track will be a hard one to miss, when it drops 24th March 2017.

All we said, all we’ve lost before
We are dead and gone,
Took a change on a time reborn,
We stood strong thereon.
Found the words just as we were taught,
We won’t hide for long,
Leading us into something more,
We scream on.

We could say, we were something more,
That is all long gone.
Into the flames, we were never sure,
That we would breath beyond.
As we’re born, with a life once more,
Ambers break dispond,
In the glow I will know for sure,
That we are strong.