We Happy Few is an indie survival horror video game developed and published by Compulsion Games. The game revolves around a person in a dystopian retrofuturistic-fashioned world where everyone is controlled by a personality-altering pill called Joy. The protagonist, Arthur Hastings, works as a ‘redactor’, a government censor similar to the Ministry of Truth, erasing unhappy stories from newspapers and records. During his work one day, he finds an article about his brother Percy and has a sudden flashback. Feeling somewhat traumatised by this, he decides not to take his Joy. By doing so, he soon finds the real world much different from the reality he believed himself to inhabit. The game is being developed on Unreal Engine 4. We Happy Few is the tale of a plucky bunch of moderately terrible people trying to escape from a lifetime of cheerful denial in the city of Wellington Wells. 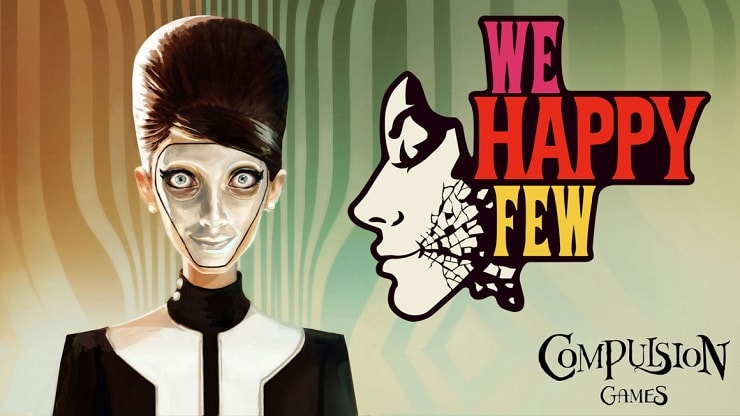 Set in a drug-fuelled, retrofuturistic city in an alternative 1960s England, you’ll have to blend in with its other inhabitants, who don’t take kindly to people who don’t abide by their not-so-normal rules. Set in a retrofuturistic 1960s, you will find a city ravaged by war and rebuilt by delusionally happy people. Everything appears to be happy in Wellington Wells, including the roads, the people, and its omnipresent television personality, Uncle Jack! However, it’s a beautiful world on the brink of collapse. You will discover the history of this world, and how it came to be just so beguilingly happy. We Happy Few is about surviving in and escaping from a procedurally generated world, where you must learn to hide in plain sight. If you act out of turn, or you’re not on Joy (the local happy pills), the locals will become suspicious and will rapidly turn your frown upside down! Forcefully. You will need to practice conformity, stealth and combat if you want to survive long enough to escape.

We Happy Few Trainer (+16) Options:
Trainer for the game We Happy Few, you can use it to activate these essential Cheat Codes: Infinite Health, Infinite Stamina, No Hunger, No Thirst, No Fatigue, Infinite Joy, Weapons Infinite Durability, Infinite Items, No Crafting Requirement, One Hit Kill, Super Speed, Super Jump, NPC Cannot Move, Infinite Money, Daytime. Note: This cheat tool is for the original version v1.6 (Update 2017.04.01) of the game We Happy Few.