For Tomkat, a band based out of Denton, Texas whose work spends much of its time buried in the grey areas between pop, jazz, rock and dance music, the idea of coordinating complex sounds and musical meters is at the heart of their cross-genre investigations. Led by the haunting croon and ache of Katrina Cain’s voice, as well as the dynamic rhythmic interplay that exists within the band, TOMKAT are looking to express their native pop and electronic instincts without sacrificing their evolved temperament to the confines of a modern musical marketplace. Drawn from all areas of the country, the band was founded in 2015 by vocalist Katrina Cain (Connecticut), guitarist Andrew McMillan (El Paso), bassist Mike Luzecky (St. Louis) and drummer Jonny Harmon (Columbus) who first met as students at the University of North Texas. 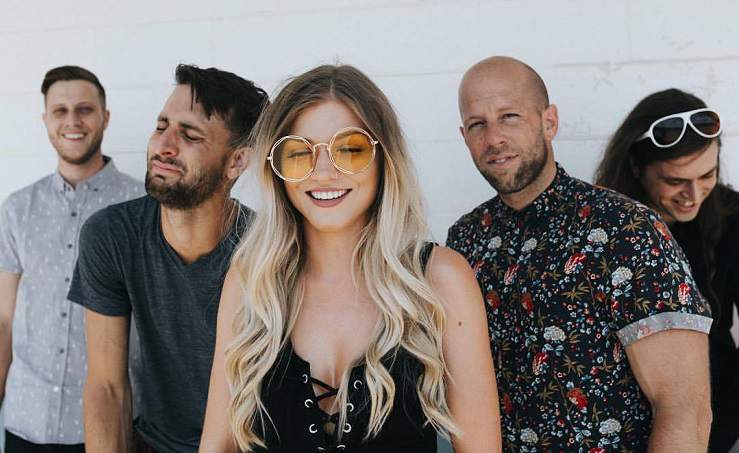 Tomkat‘s full length album, Icarus, was recorded in July of 2016 with Tanner Landry of Fort Worth Sound, though the music had been written and sat waiting for over a year prior. Cain, McMillan, Luzecky and Harmon had longed for a more electronic element than their current sound possessed, and found those pulsating and metronomic sounds with Trenton Hull (synthesizer), who joined the band for just one show and a handful of rehearsals prior to jumping with both feet into the studio. The songs on the album ebb and flow, with “Drowning” beating a dance pop spasm into your feet and others, like “Phoenix” soaring through your tired mind.

No song should be taken more lightly than the other, however, as Cain’s surprisingly dark lyrics attempt to convey the emotional and psychological issues surrounding the female experience through the ages. While “Teardrops” calls to mind a slow jam complete with ’90s style vocal harmony, listen closely to the lyrics and you’ll hear a woman struggling with crippling failure beneath a mask of smiles. Similarly, “Persephone’s” hauntingly beautiful chords belie the true meaning, a story of incurable desire told not by the victim but by her abductor. Though the album is fraught with darkness and despair, the group keeps returning to a singular theme that blooms from the darkness with every track, ending in “Phoenix” resounding chorus: “Once and for all, I rise; Once and for all, I’ll fly.”

Tomkat: Teardrops Lyrics:
I’ve been flying so high,
I’ve been falling to hell.
What they see is a lie
But I hide it so well.

Never gave me your time,
Turned your back when I fell.
What they see is a smile
Cause I hide it so well.

I fall a million times,
I look up to the sky,
And oh that rain like
Teardrops on my mind.

I fall a million times,
I look up to the sky
And oh that rain like
Teardrops on my mind.

Cause I’m riding so high
When I’m running from home.
Leave the screaming behind
All those things hid below.

I fall a million times,
I look up to the sky,
And oh that rain like
Teardrops on my mind.