They Drive by Night is a 1940 black-and-white film noir starring George Raft, Ann Sheridan, Ida Lupino, and Humphrey Bogart, and directed by Raoul Walsh. The picture involves a pair of embattled truck drivers and was released in the UK under the title The Road to Frisco. The film was based on A. I. Bezzerides’ 1938 novel The Long Haul, which was later reprinted under the title They Drive by Night to capitalize on the success of the film. Part of the film’s plot (that of Ida Lupino’s character, Lana Carlsen, murdering her husband by carbon monoxide poisoning) was borrowed from the 1935 Warner Brothers film Bordertown with Bette Davis.Wikipedia®

Plot: Brothers Paul and Joe Fabrini run a trucking business in California mainly shipping fruit from farms to the markets in Los Angeles. They struggle to make ends meet in the face of corrupt businessmen and intense competition. They are forced into driving long hours and one night pick-up waitress Cassie Hartley who’s just quit her job at a truck stop. The three of them witness the death of a mutual acquaintance when he falls asleep at the wheel. This has a profound effect on Paul and Joe and they become determined to find a way to make the business pay so they can quit.

They Drive by Night – Trailer

They Drive by Night – Lobby Card 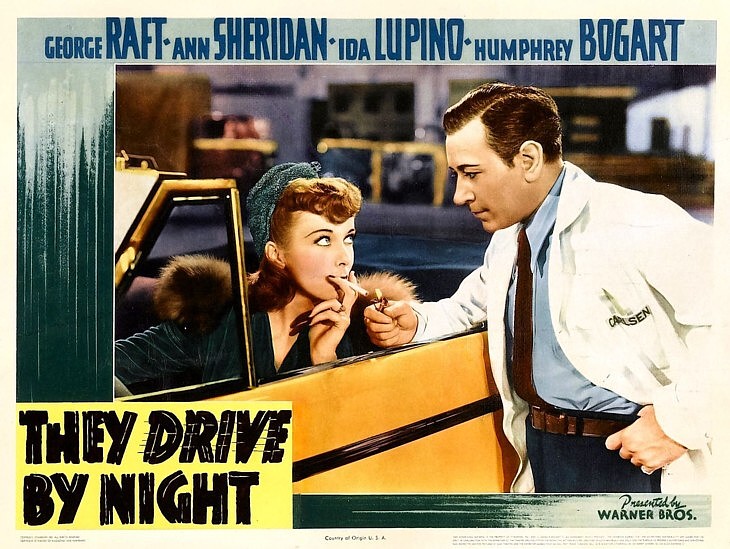