Star Trek is a third-person action-adventure Star Trek video game, developed by Digital Extremes and co-published by Namco Bandai Games and Paramount Pictures in Association with K/O Paper Products, Bad Robot Interactive & CBS Studios, for PlayStation 3, Xbox 360, and Microsoft Windows. The game is a single-player action game with cooperative gameplay elements allowing two people to control Kirk and Spock. During his E3 pitch, Steve Sinclair described the game’s genre as “bro-op”. The game doesn’t allow players to switch between Kirk and Spock during a chapter, nor does it allow for fellow players to “drop-in” to play alongside co-operatively. The two characters show different gameplay techniques, with Kirk being the more typical shooter while Spock has stealth techniques and can use both the Vulcan nerve pinch and mind meld. Each are armed with weapons to reflect their gameplay style, with Kirk armed with a phaser equipped with a stun setting, while Spock’s weapon is quieter and freezes enemies instead. As the player progresses through the game, they gain experience allowing them to unlock additional settings on the weapons. The Gorn are set to be the enemies of the game, attacking the New Vulcan colony. Wikipedia®. 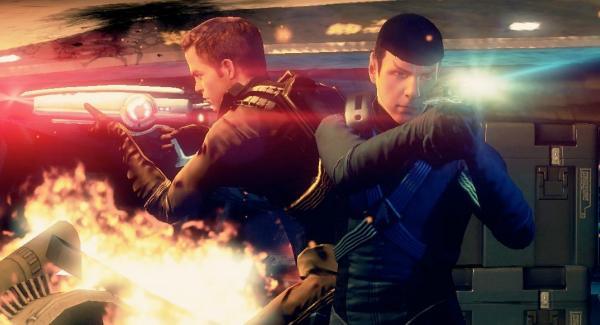 Star Trek Trainer (+9) Options:
Trainer for the adventure game Star Trek, you can use it to activate these essential cheat Codes: Infinite Health, Infinite Shield, Infinite Ammo 999, No Reload, No Spread, Rapid Fire, Blaster Without , Overheating, Infinite XP 99999, Add 9 Minutes Hack.
Note: This cheat tool is for the original version v1.1 of the game Star Trek (2013).