Shank 2 is a sequel to a 2D side-scrolling beat ’em up video game Shank by Klei Entertainment and published by Electronic Arts. It was announced on September 27, 2011 and released on February 7, 2012 for the PlayStation 3 and Microsoft Windows, and on February 8, 2012 for the Xbox 360. Shank 2 features a new multiplayer survival mode, updated combat mechanics, and new weapons. Shank 2 does not feature the cooperative story mode which appears in the previous installment, instead offering a two-player survival mode. After the death of cartel leader Cesar at the end of the first game, Shank’s homeland has been engulfed by warfare as various factions attempt to take control. General Magnus has emerged victorious, and his militia now rules with an iron fist. They have overthrown the government and Magnus has declared himself President, taking over much of the cartel’s criminal activities. The rebellion against the militia is being led by Shank’s old mentor, Elena. At the game’s opening she is kidnapped by the militia’s forces; unbeknownst to the majority of the population, Magnus is gravely ill, and he needs a heart transplant if he is to survive. He intends to take Elena’s heart, a process which will kill her. Shank must fight his way through Magnus’s army in order to rescue his mentor and once more overthrow a despot. Wikipedia®. 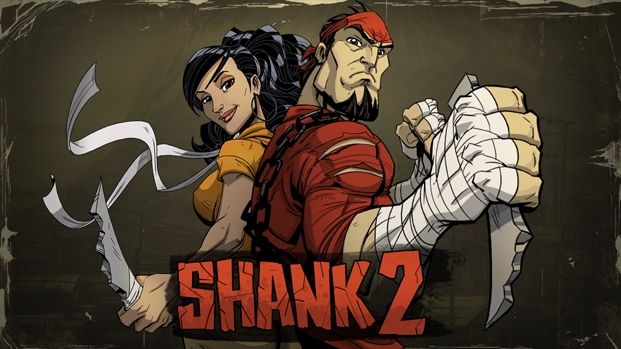 Shank 2 Trainer (+4) Options:
Trainer for the game Shank 2, you can use it to activate these essential cheat Codes: Infinite Health, Unlimited Grenades/Molotovs/…, One Hit Kill, +10.000 Points. Note: This cheat tool is for the original version v1.1(Steam – Latest Release) of the game Shank 2.