Senran Kagura: Peach Beach Splash is a third-person shooting video game in the Senran Kagura series, published by Marvelous and developed by Tamsoft. It was released for PlayStation 4 on March 16, 2017 in Japan, and on September 26, 2017 in North America, Europe and Australia. A Microsoft Windows version was released worldwide on March 7, 2018. The game focuses on the Peach Beach Splash water gun tournament, which female ninjas from various factions are invited to, and where the winning team gets any reward they want. Players take the roles of the ninjas, and fight in various kinds of game modes, some of which are online multiplayer battles, and some of which are single-player. The game was produced by Kenichiro Takaki and written by Yukinori Kitajima, with character designs by Nan Yaegashi, and was created to bring everything from the various Senran Kagura games together, to establish a single world where all of it takes place in. The plot was written as part of the series’ main storyline, as something future games in the series would build upon. Wikipedia®. 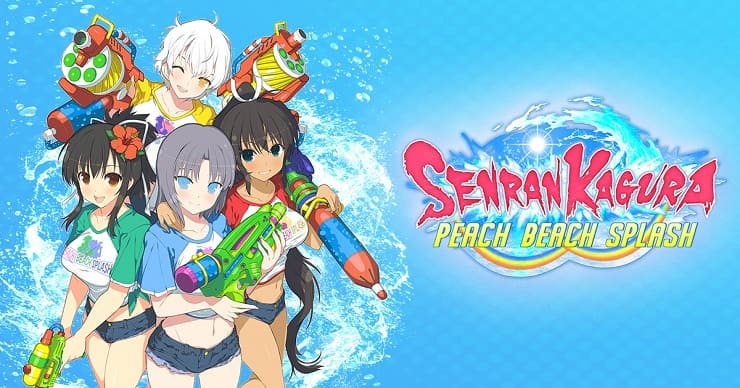 The summer of bouncy, high-flying hijinks continues for the girls of SENRAN KAGURA! They’ve fought rival ninja, evil masterminds, and apocalyptic demons from beyond the veil of sanity, but nothing—NOTHING in their lives has ever prepared them for…a water gun fight?! Summoned to a mysterious tournament by its shady organizers, the buxom shinobi students team up and face off, using all kinds of water weapons to soak and splash their opponents. As they rise through the tournament brackets, they’ll uncover the secrets behind the organization － secrets that hide an ever-growing threat to… Wait, what? Sorry, I was watching all the splashing. Choose a team of five from the more than 30 girls available, outfit them with customizable weapons and abilities, lead them through lighthearted water gun battles across five single-player storylines, or join your friends online and take on opposing teams worldwide. Come on in; the water’s great! The “Sexy Soaker” edition includes the Soaking Wet High School Uniform costume, a set of colorful bikini costumes, the Futomaki Roll Bazooka special weapon, a Bebeby pet card, and a special set of skill cards, along with a downloadable soundtrack containing 47 music tracks.