Senran Kagura is a video game series developed by Tamsoft and produced by Marvelous Entertainment. The franchise revolves around groups of female ninjas, and has received several manga adaptations. A television anime adaptation produced by Artland aired in Japan between January and March 2013. The anime has been licensed by Funimation Entertainment in North America. By August 2015, worldwide sales for the games in the series had passed one million copies. Senran Kagura: Estival Versus is a 3D Action Brawler for the PlayStation 4 and PlayStation Vita, developed by Tamsoft and published by Marvelous Entertainment. The game was released on March 26, 2015 in Japan,March 15, 2016 In North America & March 18,2016 In Europe. The PC version will be released on March 2017. It is the seventh game in the series, and the sequel to Senran Kagura: Shinovi Versus. It features 5 brand new characters, 3 characters who were previously unplayable, and 4 guest characters from other series, bringing the total playable character count to 34. Wikipedia®. 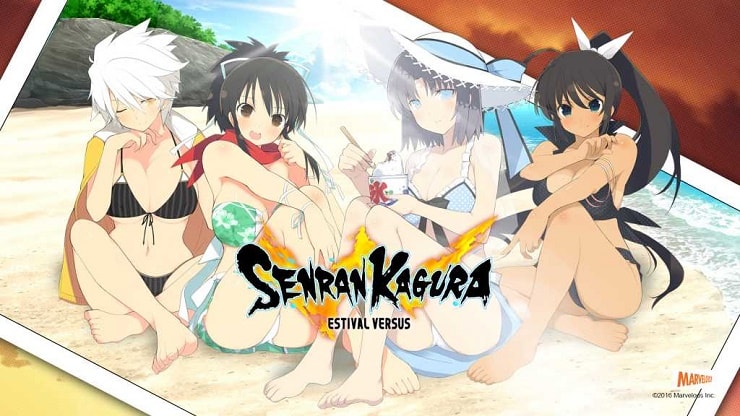 The flame that burns twice as bright burns half as long, and so it is with the lives of young shinobi. Death comes swiftly — for the lucky ones — and, for those still living, grief is a constant companion. Ryōbi and Ryōna, two shinobi sisters of the Hebijo Clandestine Girls’ Academy elite, know that truth all too well, and they mourn their beloved elder sister every day. But, when a mystical phenomenon appears, drawing the shinobi world’s finest young ladies into a parallel dimension, everything they know about life and death turns upside down. Taken to a strange world resembling a warm summer island, the girls find themselves face to face with their departed loved ones.