Mass Effect: Andromeda is an action role-playing video game developed by BioWare and published by Electronic Arts for PlayStation 4, Xbox One and Microsoft Windows. The game is scheduled for release in North America on March 21, 2017 and in Europe on March 23, 2017. It will be the fourth entry overall in the Mass Effect series and the first since Mass Effect 3. The game begins within the Milky Way Galaxy during the 22nd century, where humanity is planning to populate new home worlds in the Andromeda Galaxy as part of a strategy called the Andromeda Initiative. The player assumes the role of either Scott or Sara Ryder, an inexperienced military recruit who joins the Initiative and wakes up in Andromeda following a 600-year journey. Mass Effect: Andromeda will have a lighter tone than previous installments in the series. It has open world elements and places an emphasis on exploration. Many of the series’ traditional gameplay elements will remain, while others have been modified, such as combat, which is less cover-based and more mobile. Wikipedia®. 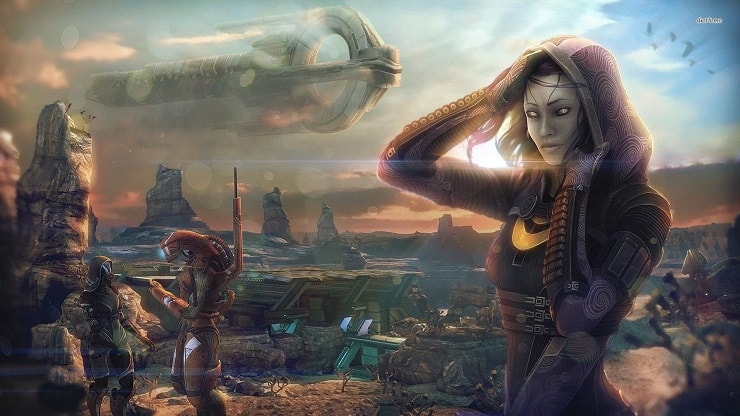 The game takes place in the Andromeda Galaxy, “far away from and long after the events of the original trilogy,” and is “very much a new adventure.” The primary protagonist is a human called Ryder. Unlike Commander Shepard, Ryder has yet to achieve “hero status” prior to the start of the game, and will undergo a narrative arc more akin to the traditional hero’s journey. While the male and female Commander Shepards are different versions of the same character, male and female Ryders are different characters said to canonically exist as they are twin siblings traveling to Andromeda with their family, including their N7 father. If a player selects the female Ryder, the male Ryder would be somewhere else in the universe and vice versa. However, the non-selected Ryder will not be a squadmate. The fate and whereabouts of the mother Ryder will also be addressed. The Ryder twins are named Scott and Sara by default. Their father is Pathfinder Alec Ryder. The Ryders will be onboard the Hyperion, an Ark starship that has been sent to Andromeda as part of the Andromeda Initiative to find a new home for humanity. A coalition of races from the Milky Way are also present in the journey to Andromeda, distributed among four other Arks and led by the flagship Nexus, the Citadel analogue.