Saints Patience is an exciting new band from London with great melodies and tight grooves that form the foundation of their classic rock set up. Drawing from a rich palette of influences, they have crafted their own sonic identity using guitars, bass, drums and soulful vocals. Essentially the project of two London-based musicians, multi-instrumentalist Spencer and vocalist Mudibu, Saints Patience place melody and groove front and centre in a thrilling audio format that mixes the classic and the contemporary by following the lead of such timeless artists as Queen, Otis Redding, Led Zeppelin and The Wailers. Their songs, enhanced live by artisanal musicians taking on rhythm section duties, are cohesive amalgamations of Spencer’s prolific guitar jams and improv sessions in his home studio, which Mudibu, formerly of Mantilla, Lostchild and The Jezebel Sextet, enhances via his rich and powerful voice. 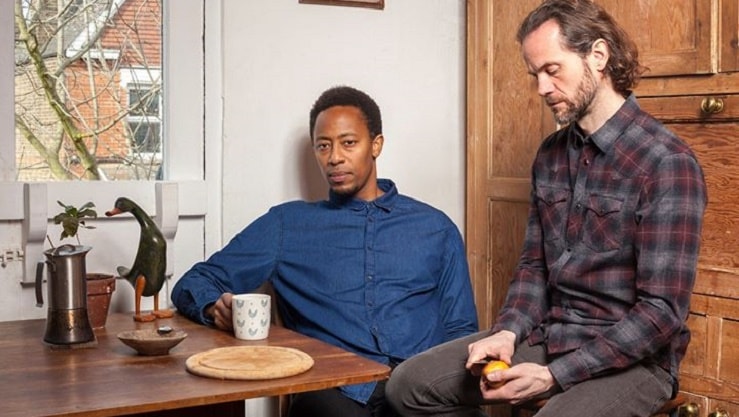 This intuitive pair – “You know it’s good when you just look at each other and smile” – have now collected the best of their writings into their debut album ‘Weather The Storm’, recorded using valve amps and minimal gear at Spencer’s studio and thus exuding a fresh and dynamic analogue vibe. Indeed, to control the sound during recording the band used loads of old duvets and blankets, covered up the windows and warned the neighbours. Proper old-school! In Mudibu’s words, the album captures “an expression of emotions that are both political and relational in context. It’s a sifting through of what really resonates with oneself and the surrounding environment. The same emotions can be individual but they are experienced by many in varied contexts. The notion of bravery in the face of these emotional challenges is implied in the album title “Weather The Storm’.

There are shades of The Beatles’ ‘I Want You (She’s So Heavy)’ to the fulsome guitar part that introduces ‘Awaken’, and it is Spencer’s expressive six-string skills that lead the charge on another nailed-on rock classic from Saints Patience. As the searing lead guitar chops and riffs its melodic arc across the verse’s nonchalant, clipped groove, gritty solo and twin-barrel anthemic chorus, it forms the perfect foil to Mudibu’s impassioned ode to infatuation and the power of attraction. “I Just Can’t Keep Away From You”, he belts out in a ridiculously catchy refrain, capturing the angst we’ve all felt when unrequited desire becomes a near unbearable ache.