Polartropica is the music endeavor of Los Angeles based, whimsical space-pop artist, Ihui (eeway) Cherise Wu. Born in Taiwan yet raised in California, Wu successfully combines quirky pop melodies, futuristic synths and classical string arrangements, creating a genre of bubblegum psychedelia that you’ve never heard before. Polartropica derived after Wu heard a song which couldn’t be defined by a genre – ‘Polartropic’ by Mark Foster. Admiring the contrast between both ‘polar’ and ‘tropical’, Wu decided to formulate a place where things can exist where they don’t belong. Polartropica fuses elements of complete opposites together with the outcome
resulting in a unique, ethereal sound that defies all sonic worlds. Using both organic and synthetic instruments, Wu conceived a visionary dream world for listeners to escape to. Wu professes, “I wanted to create a healing, inspiring and empowering space with just the right amount of disco-party!” 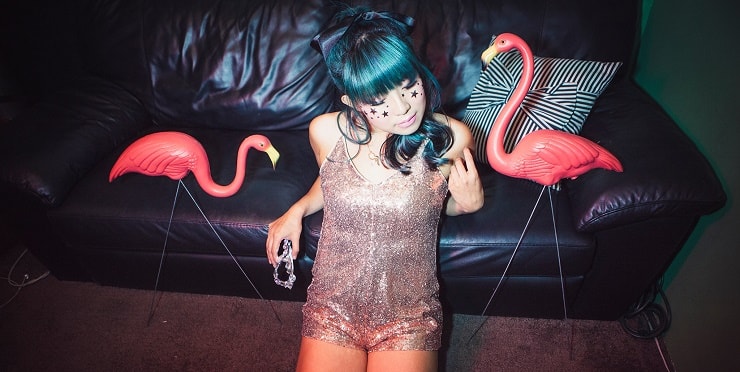 After the successful release of her debut single in 2015, with Free Bike Valet describing her music as “chock-full with danceable pop beats, swirly synth arrangements and video game-ish effects”, Wu is back with an even more glittery and fantastical work of art than ever before. The theme of the new music is a magical make-believe world, with an abundance of dreamlike outer-space sounds seeping into the songs. “I’m hoping to always make ethereal and beautiful music, the songs are generally lyrically sad and a little dark, but the music always has a sparkly sheen”, admits Wu. Polartropica’s new releases were inspired and affected by events that transpired in 2016. Lead single, ‘Crystal Ramen’ was written after witnessing the breakdown of a friend’s 10 year relationship. Wu confesses, “It was a crushing, slow burning slow motion movie, and the song is dedicated to my dear friend. The narrative is inspired by disconnecting and moving forward from not only harmful relationships
but also old ideas we can be attached to”. ‘Crystal Ramen’ features sweeping, cinematic soundscapes and an insight into Wu’s love of movie and theatrical scores.

‘Olympia’ utilizes J-Pop characteristics, with shimmering dreamlike vocals, creating an electro-pop anthem. Thematically influenced by the movements for rights and equality during the presidential elections, as well as the 2020 Tokyo Olympics trailer, it’s a rallying cry with an energizing and upbeat message. ‘Golden Soul’ is drenched in electro synth, dramatic strings and upbeat drum machines. Stylistically ‘Golden Soul’ sounds animated and avant garde, highlighting Wu’s commitment to establishing a sound with no restrictions.

Polartropica is focused on bringing everyone together on an audio-visual outer space adventure. Their successes to date include their debut EP Astrodreams being released via Lolipop Records, which was then selected for Les Femmes International Underground Film Festival. They have received numerous film and TV placements. Most recently Wu had the privilege of scoring Yoko Okumura’s award-winning short, ‘Strawberries Will Save the World’. Polartropica also pride themselves on giving back to the community, by pairing up with organizations such as Planned Parenthood and Youth Justice Coalition for live shows. Integrating 90’s pop, classical arrangements and intergalactic space-pop, Polartropica is guaranteed to feed your imagination, with their eccentric and distinguished sound.

Polartropica: Olympia Lyrics:
Don’t give UP
Don’t give IN
When everything you’ve worked for falls to pieces once again

Time will tell
They won’t win
When they crush our spirits, how do we stand up again

The stars don’t look the same
When you’re not here to tell me what they say
And what they mean
I still see you in my dreams
Every day, I hear you say it’ll be ok
But I still miss you anyway