Passage to Marseille is a 1944 war film made by Warner Brothers, directed by Michael Curtiz and produced by Hal B. Wallis with Jack L. Warner as executive producer. The screenplay was by Casey Robinson and Jack Moffitt from the novel Sans Patrie (Men Without Country) by Charles Nordhoff and James Norman Hall. The music score was by Max Steiner and the cinematography was by James Wong Howe.

The film reunited much of the cast of Casablanca (1942), also directed by Curtiz, including Humphrey Bogart, Claude Rains, Sydney Greenstreet, Peter Lorre, and Helmut Dantine. Michèle Morgan – who had been the original choice for the female lead for Casablanca – Victor Francen, Philip Dorn and George Tobias are also featured.
Passage to Marseille is one of the few films to use a flashback within a flashback, within a flashback, following the narrative structure of the novel on which it is based. The film opens at an airbase in England during World War II. Free French Captain Freycinet (Claude Rains) tells a journalist the story of the French pilots stationed there. The second flashback is at the French prison colony at Cayenne in French Guiana while the third flashback sets the scene where the lead character, Matrac (Humphrey Bogart), a newspaper publisher, is framed for a murder to silence him. Wikipedia®

Plot: As French bomber crews prepare an air raid from a base in England, we learn the story of Matrac, a French journalist who opposed the Munich Pact. Framed for murder and sent to Devil’s Island, he and four others escape. They are on a ship bound for Marseilles when France surrenders and fascist sympathizer Major Duval tries to seize the ship for Vichy. 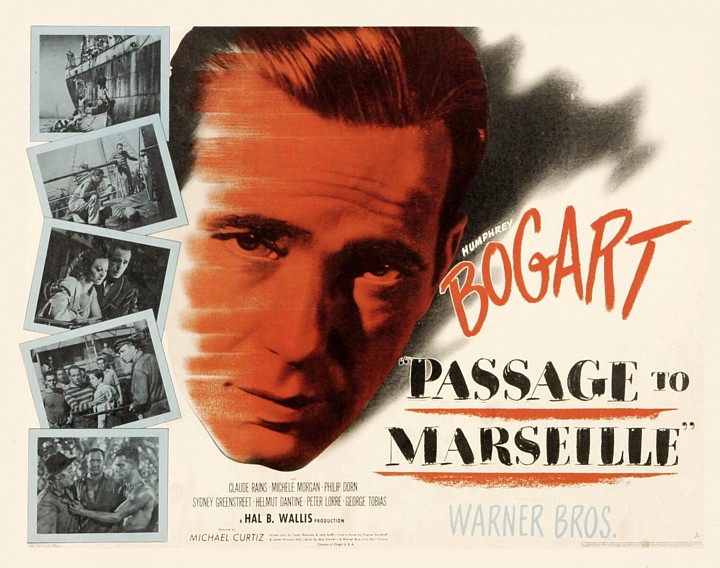