Overwatch is a multiplayer first-person shooter video game developed and published by Blizzard Entertainment. Unveiled at BlizzCon 2014, the game emphasizes cooperative gameplay using a cast of various “heroes”, each with their own abilities and roles within a team. The game entered closed beta in North America and Europe on October 27, 2015, with plans to bring the beta to Asia at a later date. The final closed beta weekend began on April 15, 2016 and primarily served as a stress test for Overwatch’s servers, lasting 36 hours. The game was released on May 24, 2016, for Microsoft Windows, PlayStation 4, and Xbox One. Overwatch features squad-based combat with two opposing teams of six players each. Players choose one of several hero characters, each with their own unique abilities and role classes. The four character roles include: offense characters with high speed and attack but low defense, defense characters meant to form choke points for enemies, support characters that provide buffs and debuffs for their allies and enemies respectively (such as healing or speed alterations), and tank characters that have a large amount of armor and hit points to withstand enemy attacks and draw fire away from teammates. Players can switch between characters in-game following deaths or by returning to their home base, which is encouraged by the game’s overall design. The game’s maps are inspired by real-world locations; the first three maps unveiled (“King’s Row”, “Hanamura”, “Temple of Anubis”) are inspired by London, Japan, and the ruins of Ancient Egypt, respectively. Wikipedia® 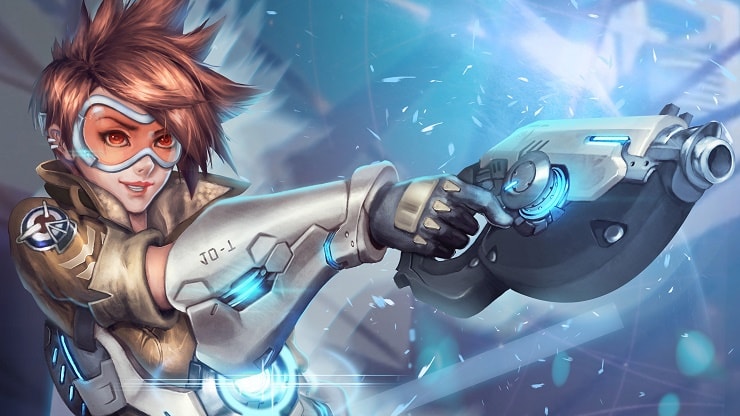 SUPPORTS ARE THE KEY TO VICTORY! – Is your team struggling? Check to see if you have a support! They are very powerful, but often overlooked as they tend to sit on the back lines and not get into as much action as the other characters. Don’t think this has to always be the case! Lucio for instance is a great front line support, who can move around quickly, and participate in fights. Zenyatta is another support who can heal, deal decent damage and debuff enemies all at the same time!

Level Up Tips:
• Group Up with Friends: Earn a 20% EXP group bonus at the end of games.
• 500 XP Bonus for Winning: That’s a bonus 100 XP while in a group.
• No Strings Attached: You are always earning XP by playing the game, at a rate of about 4 XP per second. And whether you win or lose, you always get 250 XP for staying to the end of a match.
• Gold Medals Earn 150 XP: Get Gold Medals for doing the most damage, most kills, or most heals. Silver Medals still net you 100 XP, and even Bronze Medals get you 50 XP.
• 200 XP per Consecutive Match: Keep continually playing to get a bonus 200 XP.
• 1500 XP Bonus for First Win: Play every day and win every day to get a 1500 XP bonus. Get 500 XP every time for winning subsequent matches.
• 400 XP for Backfilling: Help the matchmaking help you get a 400 XP bonus.
• Prestige System Hype: More Loot for me, more Loot for you.

Level Up Overview:
The character level is followed by the XP needed to level up.

Tips
When you select a character, the game lets you know what roles you don’t currently have on your team. There is no requirement to play these roles, but it is a good idea to follow the suggestions. Attackers have more freedom in what they pick, but I suggest trying to get certain roles filled while defending:

The rest is up to you. I generally wouldn’t have more than 1 tank, but sometimes it is okay, or even helpful. Two supports can help as well, depending on your group makeup. Offense is always a good choice, especially if played well. You also don’t always need a sniper, it depends on the map, game mode, etc.