Skip to content
Home » Music » Moddi – Run to the Water

The whole story about Moddi: “My name is Pål Moddi Knutsen, 26 years old as I write this. I come from an island in Northern Norway called Senja, where I grew up making my musical debut at the local radio station when I was five. My first album, Floriography, recorded with producer Valgeir Sigurdsson (Björk, Cocorosie etc.) in Iceland, was released in February 2010 and nominated for two Norwegian Grammies (Spellemannsprisen) the year after. I received a large grant from a-ha, toured as support for Angus and Julia Stone and played in places I had only dreamt about when I was younger. We played more than 250 concerts, among those the Reeperbahn Festival (GE), Iceland Airwaves, The Great Escape (UK), Green Man Festival (UK), Haldernpop (GE), Spot Festival (DK) and The End of The Road (UK), as well as by:larm, Øya, Hove and the Træna Festival at home. Set the House on Fire is my second album, which was released with Propeller Recordings in 2013. I never intended to make a second album, and after Floriography I felt completely empty. More that two hundred and fifty concerts had worn the melodies out. When we made Floriography, everything was calculated and arranged in detail several months in advance. This time we had no idea about where we were going. New ideas were born every day. Many times we had to start from scratch again, set fire to what we had built. Some songs needed care and silence, others needed play and laughter into the early hours. And I was by no means alone. From London came Kari Kamrud Jahnsen of Farao to sing Run to the Water with me. The other voice (that which is not mine) on Silhouette belongs to Einar Stray. All over the album producer Hasse Rosbach has scattered the sounds from his magical boxes and unpredictable mechanical pets. Together with them and many more, Set the House on Fire grew to be what it is: an album that first and foremost is about having the courage to find new ways. A second album, born from the ashes of the first.

Moddi – Run to the Water Lyrics:
Fast as you can run to the water
cool as I am I’ll give you shelter

this place is built to make you smaller
to keep your face out of the light
around the city’s growing taller through the night
and then a symphony of laughter
cuts though the air of foreign tongues
and you are back at where you started: all alone

thereâ€™s nothing I can do, thereâ€™s water coming through, I can sense it
and I swim the whole night through but in spite of all I do I’m defenceless
so I’ll try to pretend I was always alone and with a handful of pills I’ll divide us
’cause with millions of miles between arrow and bow it is easier to kill it with silence

so to hide from our hundreds you went underhill where the treeroots grew into your bones
I tell all my friends you are living there still in the teeth of the chaos above
hammer hits head but the nail doesn’t move though the blows throwing sparks all around
it is never too late but today is too soon, so for now you must stay underground

so fast as you can run to the water. 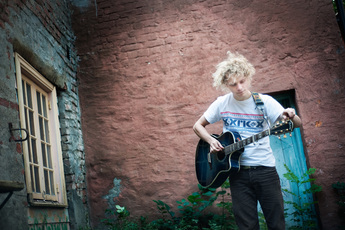