Hannes Naumann and Maik Biermann have known each other for a very long time, battling through the adventures of Thuringian forest-provinces, before they magically became Captain Capa. Born in beautiful smalltown Bad Frankenhausen, they grew up between videogame and garagepunk, before entering the world of electronic music, discovering a love for big melodies on flashy beats.
As they decide to rob their piggybanks to gain the power of sequencers and synthesizers, to create a stunning EP of sci-fi-tech and emo-pop, they both knew, that neither big city lights nor a bright skyline would be necessary to create electronic popmusic. “These Fights Are Never Over” is released on small-scale DIY Label “Cobretti Records” and acclaimed as an insider’s tip of german, independent dance music. In May 2009 it’s time for their first longplayer. Mixed, cleaned up and made dirty again by Norman Kolodziej, master of electro-bam of bands Der Tante Renate and Bratze, “Tonight Is The Constant” is acclaimed as catchy highspeed-pop by critics and indie-kids. The album lights a spark with ingredients of nurave, emotional electro-escapades and a glimmering voice, unable to decide if it’s from a US emocore band of the early 2000s or abductet from some brit-pop-hero. Having a powerful debut-album and the sound of thousand angsty teenage-souls in their backs, Captain Capa travel through time and space, where they share their stages with children of big family Audiolith. The colleagues of Egotronic, Bratze, Frittenbude or Juri Gagarin become friends: supporting, remixing, collaborating. Supershirt, the big brothers in spirit, even decide to produce a split-EP called “Tote Tiere” in october 2010, including a furious title-track feature burning through the clubs. A few months later, the band itself is invited to be a part of the label-insanity called AUDIOLITH RECORDS. Releasing “Saved My Life“, Captain Capa throw out a consequently over-pumped pop-record, lacking all subtlety – showing even clearer which influences burn in their hearts, willing to burst out at any time.

Beware of the fox, we’re almost there! Up above you can see the wonderful video for our new single “Foxes”, filmed and cut by the amazing Sören Fischer of Berlin-Fainting-video-fame, written and put together by ourselves and a lot of friends at home. You can get the song on iTunes and grab an unreleased non-album track and a great remix of Schafe & Wölfe along the way. 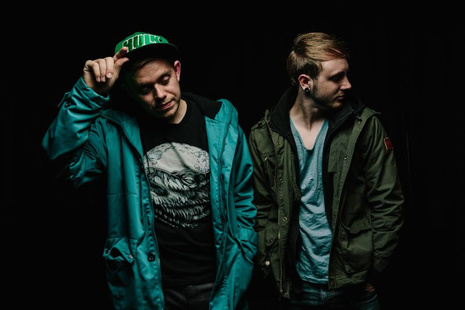