Magic!, originally stylized as MAGIC!, is a Canadian reggae fusion group based in Toronto, Ontario, Canada. The group is composed of lead vocalist, guitarist, and producer Nasri Atweh, guitarist Mark “Pelli” Pellizzer, bass guitarist Ben Spivak, and percussionist Alex Tanas. Active since 2012, the band is signed with Latium, Sony, and RCA Records, releasing their debut studio album Don’t Kill the Magic in 2014 and their second studio album Primary Colours in 2016. They are most prominently known for their hit single “Rude”, which charted at No. 1 in several countries worldwide. The band is heavily inspired by the musical groups The Police and Bob Marley and the Wailers. They are known for having a signature reggae-influenced pop sound. 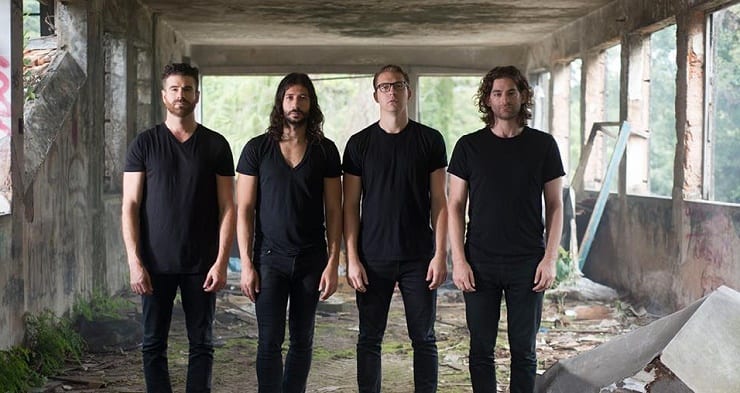 On March 25, 2016 MAGIC! released their first single off of their second album Primary Colours, called “Lay You Down Easy”, this was a collaboration with Sean Paul On the evening of June 18, 2016, MAGIC! released their second single off of “Primary Colours” called “Red Dress”. The song was first premiered on Apple’s radio station Beats1. The band first heard the song premiered as they were broadcasting a facebook live video to their fans. On the morning of June 20, 2016 MAGIC! was part of the Muscular Dystrophy Association’s #LiveUnlimited, they broadcast a live rehearsal video to facebook to raise money for MDA. The album “Primary Colours” was released on July 1, 2016. On July 2, MAGIC! released a special version of their song “No Regrets” in memory of the victims of the shooting on June 12, 2016 at Pulse Nightclub in Orlando, Florida.

In 2014, Toronto-bred, Los Angeles-based quartet MAGIC! scored the song of the summer with their debut single “Rude” — a buoyant reggae-pop tune that held the No. 1 spot on the Billboard Hot 100 for six weeks, charted in 41 countries, and sold more than 10 million singles, while its video nears a billion VEVO views. It was a juggernaut that launched their debut album, Don’t Kill the Magic, into the Top 10 and introduced MAGIC!’s breezy sound — a catchy fusion of reggae, pop, and R&B — to the world. “When ‘Rude’ got big, my thought was, ‘What do we do with this?’” says the band’s lead vocalist and chief songwriter Nasri. “So we chased it. We used its success to get us around the world a few times and to turn those 350 million streams into a fan base.”
Indeed over the past two years MAGIC! has established itself as a bonafide sensation thanks to its undeniably catchy sound, superlative songwriting, and masterful musicianship. Now the band, which also features guitarist Mark Pelli, drummer Alex Tanas, and bassist Ben Spivak, has released a new single, the Caribbean-tinged “Lay You Down Easy” (featuring Sean Paul), which debuted at No. 1 on Billboard’s Reggae Digital Songs chart and racked up two million Spotify streams and one million VEVO views in its first two weeks. MAGIC! is also gearing up for the July release of its new album, Primary Colours, which finds the band further displaying its reggae influences and pop smarts.

Magic!: Red Dress Lyrics:
She’s tried on everything
Everything little thing inside her closet
And she knows it’s getting late
Knows that I’ve been waiting and I’m starving
Cause we’ve been working overtime
She wants to make a night that we’ll remember
And I’m staring at the time
Thinking it’s alright, put on whatever

But I’ve been on my best behavior
Pacing back and forth
And ten thousand lifetimes later
When she walks through the door, I say…

But I’ve been on my best behavior
Not to cause a scene
But when we finally get home later
It’s just you and me, and I say