When Leon Timbo went to perform at Bishop T.D. Jakes’ The Potter’s Church in 2008, he hoped to change people’s lives with his uplifting music. But it was the Jacksonville, Florida, native’s life that was about to change. After delivering a rousing set that focused on Timbo’s signature emotionally-rich, love-centric tunes, the singer-songwriter-musician was met backstage by Tyrese. “He walked in the back after I was done and said, ‘Dude. I don’t know what just happened, but whatever just happened I want to happen tonight at my show,’” Timbo recalls today. That night, Timbo opened for Tyrese at the House of Blues in Dallas, setting the foundation for a friendship and brotherhood that has enabled Timbo to hone his skills and perform and create music in the studio with some of the biggest names in music history, from Quincy Jones and Kenneth “Babyface” Edmonds to R. Kelly and Diddy. Timbo spent several months in the studio with Babyface, in particular, as he developed his sound, his voice and his songwriting abilities. While working with many of music’s elite artists, Timbo met Riverphlo Entertainment’s Luther “Mano” Hanes. The two formed a quick bond that culminated in Timbo’s signing to Riverphlo. Timbo’s just-released Introducing Leon Timbo EP on Riverphlo fulfills the artistic promise a bevy of industry heavyweights have seen in the guitar-toting virtuoso. On elegant, guitar-driven and piano-accented “What Took You So Long,” for instance, Timbo’s gentle voice delves deeply into the spiritual connection a man feels toward the love of his life.

Leon Timbo – What Love’s All About

“I’m not just randomly choosing a person,” Timbo explains. “There’s something bigger than me, bigger than you that’s connected us. It’s just taken us this long to find out what it is. It’s about the idea that our relationship is bigger than surface and that because it’s bigger than surface, nothing surface should be able to deter us from our future. I like speaking on that because there’s a space for it, a gap. It’s that thing that not many people happen to be speaking on right now.” Similarly, Timbo taps into a deep emotional connection on “Don’t Call,” which details the type of help a loved one provides by simply being there for their friend. “It’s a reflection of something that I missed personally and that I think, as a principle, we’ve missed,” he says. “We’ve missed someone being there for us without an agenda, someone loving us because they love us.” Elsewhere, Timbo examines pain on the powerful “Miss Me.” Here, he belts out a passionate song about the agony caused by an unfulfilled relationship. “It speaks more to the idea that I’m worth more than neglect,” Timbo says. “It speaks to the idea that I see myself this way and so whoever loves me should love me this way. If they don’t, I have to love me enough not to be where they are.” There’s a reason Timbo’s music covers more than the superficial aspects of relationships. “I see love in the world,” he says. “I find the core to living finding that love, dealing with that love, processing that love and I believe that’s in every aspect of our lives, from our favorite team to our favorite candidate for President. It stems from a connection, a passion, that concept. I like to talk about the distractions of that concept, the freedoms and the pains of that concept. That’s the lens that I look at everything through.” Growing up with parents who were both pastors, Timbo’s lens did not initially include music. Even though he hung around musicians and didn’t think he had any inherent musical talent, Timbo became increasingly frustrated by his lack of musical acumen. Timbo then consulted his two fathers: his heavenly Father and his biological father. After locking himself in the bathroom, he said a prayer. Timbo’s biological father also provided significant insight to his son. “My dad told me, ‘Be you, because you can only be No. 1 at being you. You can only be No. 2 at being anything else.’”

Leon Timbo – What Love’s All About Lyrics: 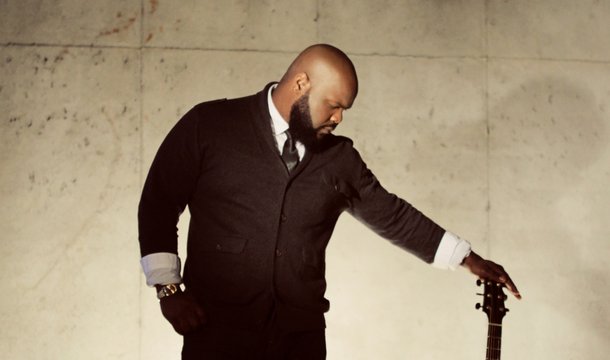