London-based art-pop trio Kyoti see out a very successful first year by announcing their new single ‘Chimera’, due for release in November 2016. After releasing their debut single ‘Cave In’ in May, shortly followed by jazz electro fusion ‘Curved Edge, Straight Line’ in July; the art project’s most recent release delves deeper into their distinctive sound. ‘Chimera’ finds room for the intelligent lyrical influences of John Grant spliced with the minimalist textures of electro producers Kavinsky, SOHN, and James Blake. Having already assembled a substantial following, the trio has earned support from the likes of Indie Shuffle, Complex and C-Heads, as they make further headway for the top of the alternative music hierarchy. 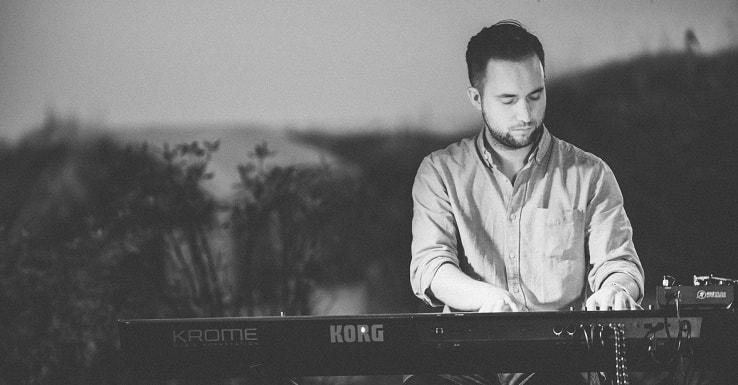 Lead singer Ed Burgon explains that ‘Chimera is about moving past the loss of a loved one, and that strange internal conflict you feel at times of great change.’ He was inspired to write the track after reading about the death of Carole Lombard: Clark Gable’s third wife and how it completely altered his outlook on life. ‘The word ‘Chimera’ is the state of being two things in one, and something which is unattainable. Both these meanings resonate throughout the song which is about love, grief, and the strange dichotomy of mixed emotions as a relationship ends’. We begin with exposed minor chords accompanying the lone vocal, before crescendoing into a ballad-like chorus and bridge with cascading synths, vocal harmonies and scattered drum beats. KYOTI teamed up with Theatre Director Tom Birch to create the accompanying visuals. The track’s layers of meaning are contrasted with the striking simplicity of a single continuous shot. Ed dramatically performs direct to camera with bursts of light and film projections interspersing onto his face throughout. Birch describes the film as ‘an honest, uncluttered, moving performance’.

KYOTI’s aesthetic as an art outfit is every bit as important as their stripped back, electro-wave sound. The three-piece, made up of Benji Huntrods, David Mabbott and Ed Burgon, base their image and artwork on the abstractness of an ordinary, mundane world. Specifically inspired by British Modernist sculptors like Barbara Hepworth and the surrealist optical illusions of M.C. Escher, they balance their image and artwork with the over-arching impact of contemporary pop music, citing artists like Hot Chip and Joanna Newsom as their main points of reference. Piecing together a number of artistic and musical influences, London-based art project KYOTI bring a plethora of unique talents to the fore, as demonstrated by their poignant and mesmerising new single ‘Chimera’.