Australian singer/songwriter/comedian Jude Perl unveils the visuals for her new single ‘Hungry and Horny’, taken from her debut album ‘Modern Times’ produced by Grammy Award – winning engineer Brian Paturalski (Album of the year in 2003 with Outkast). Jude Perl has been performing professionally for the past 7 years as a singer and pianist and in the last year has branched out into stand up and music comedy. In 2013, her debut single ‘Girls & Boys’ received regular commercial radio airplay all over Australia (including Fox FM and 2Day FM). The following year, Jude starred in the critically acclaimed narrative concert ‘Let’s Get It On – The Life & Music of Marvin Gaye’ in Melbourne. 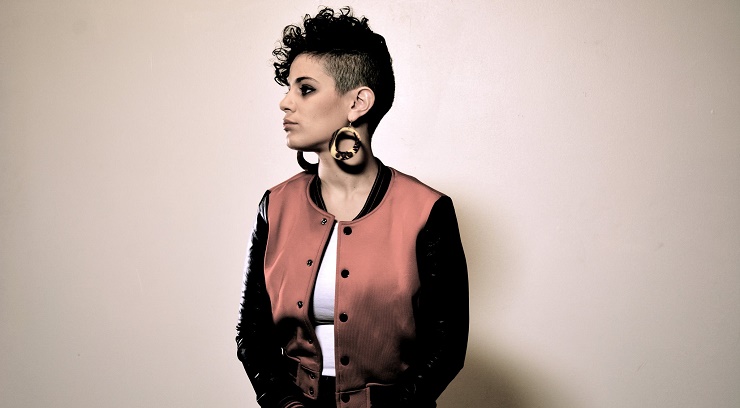 Often described as ‘funk-a-licious music’, Jude offers a collection of feel good funk/pop/soul tunes that will make you want to sing along. Named purposely after Charlie Chaplin’s famous film, her debut album provides a satirical window on the advertising world that we are living in : « Music and advertising are so intertwined, which to me seems so ludicrous, as they have such different goals. Music is supposed to elevate people and challenge people and advertising kind of does the opposite » With that approach in mind, Jude promotes her new album with fake advertisements set in the 50s, 80s and present day, pretending to have sold her intellectual property and identity to a sugar company. In her fun new music video ‘Hungry and Horny’, Jude Perl impersonates an anonymous actress who tries to look good on camera to please the producer and sell whatever she’s told to sell. Her debut album ‘Modern Times’ is now available on Bandcamp and on iTunes Australia.

Her debut album ‘Modern Times’ was produced in LA by Grammy award winning engineer Brian Paturalski (Outkast ‘Speakerboxxx/The Love Below’). Whilst in LA, Jude also worked with Colin Hay (Men At Work) recording one of her album tracks with him at his studio and singing backing vocals on his latest album ‘Next Year People’. In 2015, Jude performed her first hour long solo comedy show ‘Is It Just Me?’ for the Melbourne International Comedy Festival. Her season sold out and 3 extra shows were added due to popular demand. ‘Is It Just Me?’ has since won a Green Room Award for best original songs.

You’re a snake
Setting traps all over the place
Never showing your face
You’re killing us slowly,
Sometimes quickly
Don’t you care?
But that’s how you wanna live your life

We all pay
For the insults you spit in our face
Intelligence waste
Nobody needs you
Nobody wants you
In their life
I’m so sick and tired of your lies!
CHORUS
BRIDGE
I know I’m not alone
Maybe we all feel this way
But we don’t know what to do
Where to go or what to say

My new choice
I’ve decided to tune out
Your voice
Inside I rejoice
Nobody needs you
Nobody wants you
In their life
I’m so sick and tired of your lies!
CHORUS x2