Hailing from the southernmost point of England, at a young age Ishani returned with her family to the sprawling metropolis of Bangalore, India, where she spent her childhood. After obtaining her degree in TV, Film and Radio in Singapore she moved to London to study Audio Engineering at Alchemea & Point Blank. Her first track ‘Pelican Elephant’ was picked up by MTV India and she was showcased as a BBC introducing artist. Ishani has performed at Sziget Festival and she’s also opened for the Icelandic electronic group ‘GusGus’ at Be My Lake Festival. Her second single ‘Don’t Stop the Fight’ was downloaded over 400,000 times after being included in the Indian interactive comic book Priya’s Mirror. 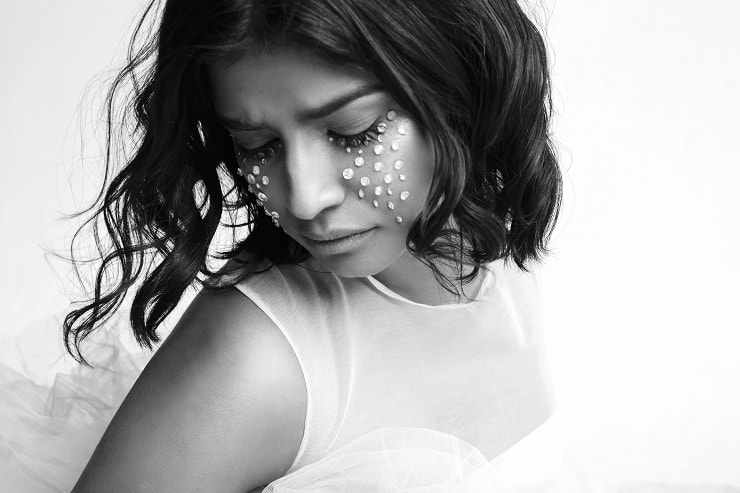 Ishani is deeply influenced by artists such as Massive Attack, Portishead, Morcheeba and Hooverphonic. She is now working on the new music that will eventually be released as her debut EP Stormy Emotions which is due out in August 2018. Instantly recognisable by her distinctive vocals, and with incisive and often challenging lyricism, (‘Don’t Stop The Fight’ centres on the horrific social effects of rape), Ishani has already earned her dues as a serious and provocative recording artist. New single ‘Insomnia’ centres on the anxiety that keeps us awake every night, and it’s sure to keep the aura growing around this brilliant and brave new voice.

‘Insomnia’ is a vital and heady show of solidarity with victims of sleeplessness. Like the beginnings of sleep-deprived psychosis, a menacing and glitchy laugh taunts the listener before the new-age trip hop beat drops. It’s an ambient and cinematic lullaby to all the insomniacs whose dusk introspections have taken a psychic turn for the worst. Carefully interwoven acoustic and electronic elements make this a resplendent show of futurism as Ishani’s searing vocals call to mind the effortless melodics of Grimes. Infectiously hard to pin down, ‘Insomnia’ moves through electro pop motifs and huge walls of rock and roll guitar as it builds to its mesmerising climax. As the tumbledown guitar lines collapse away the song loops back to its beginning and Ishani coos the repeated mantra “I’ll sleep when I’m dead,” a sinister reminder of the self-circumscribed hell of the sufferer. Ishani is a thrilling new voice for a generation unafraid to be open about its problems. With her canny ear for a catchy tune she’ll be soundtracking many of our long nights yet.