Hundred Waters – Innocent. Hundred Waters is an American band formed in Gainesville, Florida in October 2011. Both of their albums received much critical praise and reviewers often noted the group’s blend of electronic and organic sounds. The band is composed of Nicole Miglis (vocals, piano, flute), Trayer Tryon (production, electronics, bass), Paul Giese (electronics, guitar), and Zach Tetreault (drums, percussion, trumpet). The group came to prominence in 2012 with the release of their first self-titled album and an unexpected partnership with Skrillex’s predominantly electronic OWSLA record label. Hundred Waters wrote and produced most of their second album, The Moon Rang Like a Bell, while on tour with Alt-J, The xx, Julia Holter and others; it was released on May 27, 2014. Wikipedia®. 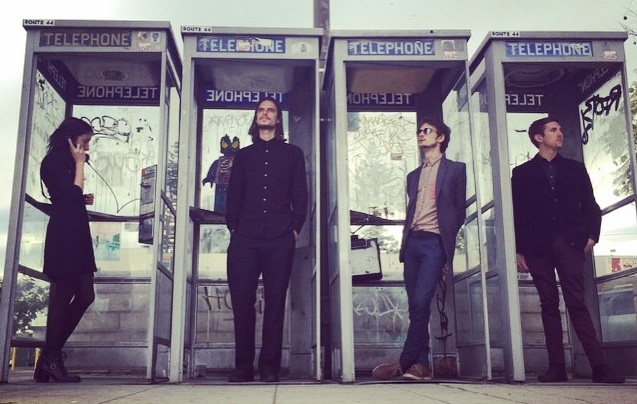 The first two singles Down From The Rafters and Cavity were both awarded Pitchfork’s Best New Music designation and the latter premiered on NPR alongside a video directed by acclaimed experimental filmmaker, Michael Langan. NPR commentator Jacob Ganz called the album’s first singles “dense” and “hypnotic”. Several days before the release of The Moon Rang Like a Bell, Hundred Waters and their management company, Family, produced FORM: Arcosanti, a music festival held at Arcosanti an experimental town and molten bronze bell casting community founded in 1970 by Italian architect Paolo Soleri in central Arizona. The band had previously stayed at the facility; Giese had studied the town while earning a Masters degree in architecture at University of Florida. The festival was meant for the friends, family and residents of the Arcosanti community, but it became a three day event celebrating the May 27th release of The Moon Rang Like a Bell. Performers included Majical Cloudz, How To Dress Well, ESKMO, Kodak To Graph, Julie Byrne, Suno Deko, Alvin Risk and others.

Reception to the album was positive. Pitchfork gave the album 8.3 out of 10 and a Best New Music pick, calling it a “refinement” to their debut. Rolling Stone gave the album a 3.5 out of 5. It peaked at No. 18 on CMJ’s Top 200 chart, leading to in-studio performances including an on-air interview and performance at Seattle’s KEXP. BitTorrent also released a BitTorrent Bundle for the album featuring a selection of the songs and bonus materials which has been downloaded 984,000 times.

The band performed The Moon Rang Like a Bell live, headlining a tour with Mas Ysa, GEMS, and Pure Bathing Culture from June to July of 2014. It was also for the Pitchfork Music Festival, performing to a live and online live-streaming audience on July 18, 2014. Following their US tour dates, Hundred Waters began a European headline tour. On July 14, 2014 Hundred Waters and Interpol announced that they would be touring the United States and Canada together during Fall 2014.

Hundred Waters’ album The Moon Rang Like A Bell is the better part of a year old at this point, but that thing has legs. Case in point: The band has made a new video for the album track “Innocent,” and it’s enough to help you hear an already-beautiful song in a new way. Jeremy Clapin directed the animated video, a mysterious sci-fi tale about a sentient robot vacuum cleaner who looks something like a floating octopus and who’s on a mission to rid an abandoned space station of creepy glowing-eyed bugs. There’s a lot of contemplating the vast isolation of space, but there’s also a story, as the video weaves in little hints about what happened here.

Hundred Waters – Innocent Lyrics:
[Verse 1]
There was a light on… a light on inside… I saw it crawling
Looming, low ringing sigh
Its smooth skin
Sliding
O the line of illusion
Is so very loose (ain’t it darlin’?)
Come lie here, say it’s okay
There’s nothing… no one… no real reason

[Chorus]
But every other word’s
A war inside
Legs are no good when
They’re paralyzed
Always wondering
Always worrying
Innocent… innocent
Why do I worry if you’re innocent?