Post-punk four-piece, Hope, reveal the striking visuals for ‘Drop Your Knives’ and announce their first London show, after releasing their formidable debut LP on Haldern Pop. HOPE can be described as the artistic response to fundamental question posed by the band: “Marching, brute force, slavish discipline, technocracy, and techno – all quintessential German clichés. Ironically though, whenever a German band is loved abroad, it is for these traits exactly. DAF, Kraftwerk, and Rammstein are prime examples. But can there be German pop music?” To help conjure an image of their sonic reaction simply imagine Portishead formed in Berlin today: Sculptor Josef Beuys then shreds the band with a coarse wire brush, and exhibits them in a dark, 100-foot high silo to produce artificial icebergs. The resulting ‘Gesamtkunstwerk’ may well be a close approximation. 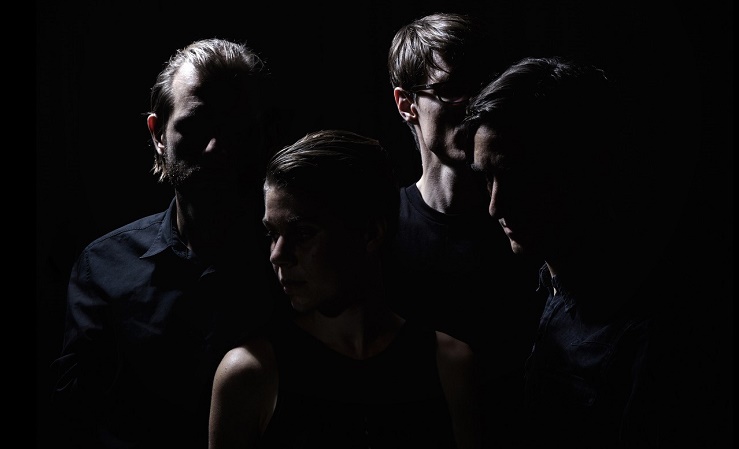 ‘Drop Your Knives’ is all about refusal and anger, encountering desire and love. To portray this, video director Riccardo Bernardi plays on the interaction between darkness and light making every picture explode – creating a new aesthetic that radiates more darkness and dystopic energy than an entire series of Black Mirror. Speaking about the artistic direction of the band, singer Christine Börsch-Supan explains… “The black aesthetic is not the same “black” of Wave or Gothic bands, but the unpretentious black of or Talk Talk.

A black which lets you forget the Jazz, the academics, and the provinces that we come from.” In 2017, producer Olaf Opal (The Notwist) built a studio in the remains of an abandoned lung sanatorium on the outskirts of Berlin, where the band recorded their debut LP. This space captured a cold ambience that colours the recording in a unique way. The album’s artwork is minimal and their information sparse, which allows the audience to experience their heavy sounds in the purest possible way.

The relentless quartet have impressed all who have witnessed their mesmeric live show. NBHAP described their set at Eurosonic Festival as “a monumental experience”. The singer of Bristol’s break-through post-punk group IDLES also showered HOPE with praise and adoration after they touring extensively together in Europe. Now their fierce live show comes to London on 20th October, when the band headline Sebright Arms in Bethnal Green. Off the back of early support in the UK from Louder than War, ‘Drop Your Knives’ brings new life to the self-titled debut LP in 2018. Listen and dive into the endless wave of sound, vehemence and black.