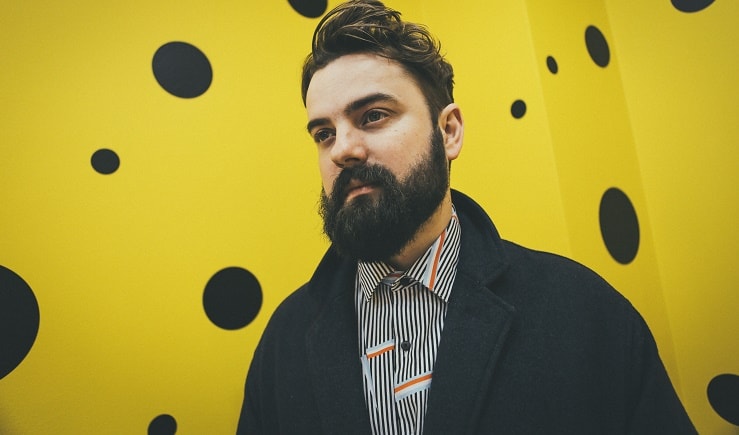 This period of prolific songwriting included such experiments as recording an album’s worth of material on a dictaphone, before the Tottenham-based, Scottish-bred singer emerged with a set of material to run by the Cocoa Futures rhythm section of Dave (drums) and Nick (bass). The next stage was finding a producer best-suited to draw the rich seam from Greg’s singular yet commercially inclined songs. Greg explains: “It was bit of a happy accident. I’d made a Spotify playlist called ‘drums sounds i like’ which had loads of GoGo Penguin tracks and a couple of Dutch Uncles tunes. I thought I’d research who’d made them ‘cos they sounded banging. Turns out it was a lad called Brendan in Manchester, so I dropped him an email and he was up for working together.” So Greg, Nick and Dave spent a long weekend at Manchester’s Low Four studios, working with Brendan Williams (he of Dutch Uncles and GoGo Penguin fame, as well as notable others such as Kiran Leonard and Koalas), completing six diverse yet sonically consistent tracks, the second of which, ‘Circus’, is released in this summer. These half dozen thrilling pop moments, whimsical, catchy and fresh, produced with exacting attention to detail and dynamic, are sure to more than sate those who’ve wisely been keeping Cocoa Futures on their ones to watch lists these past 18 months.

“‘Circus’ is about patience. Patience seems pretty boring, but it’s secretly banging. You know when you really want something but can wait for it? Trying to get better at that is what ‘Circus’ is about.” Greg, Cocoa Futures For a song concerned with biding one’s time and taking the unhurried approach, it’s apt that ‘Circus’ is easy in tempo and only gradually reveals its delights. Cocoa Futures’ latest release kicks back with frontman Greg’s soulful vocal and light precipitations of piano and electronics; its chorus raising the temperature before a velvety bass groove takes its cue. “It was the first song we recorded with Brendan,” says Greg of the band’s sessions at Low Four Studios in Manchester. “I like how smooth it’s turned out and will definitely be sending it to Smooth Radio.”

If so, listeners to Smooth – or any number of diverse radio stations – are sure to find a new earworm in ‘Circus’, which was the first song Greg wrote on the piano, an instrument he’s recently been getting to grips with. “I like it because all the notes are there on a table in front of you,” confesses the songwriter.