Fresh from signing with US Indie label Merge Records, West London-based Hollie Cook – famed for reviving lovers rock – returns with staunch new single ‘Angel Fire’. Having garnered acclaim from publications such as Sunday Times, Metro, NME, Q, Uncut, Hunger and Huck for her sophomore album ‘Twice’, Hollie’s return is marked by a sultry matured new sound. ‘Angel Fire,’ the first single from her forthcoming third album, exudes laid-back summer vibes with a confident, soulful pop flair. Hot brass, seductive synths and a spritely percussive foundation pave the way for Hollie Cook’s alluring vocals, as they muse and meander through her nostalgic ruminations on love and desire. Having previously drawn comparisons to notable reggae singers Janet Kay and Phyllis Dillon alongside iconic ’60s girl groups such as The Shangri-Las and The Ronettes, Cook’s sound continues to evolve as she effortlessly intertwines contemporary influences with her beautiful nostalgic soul. 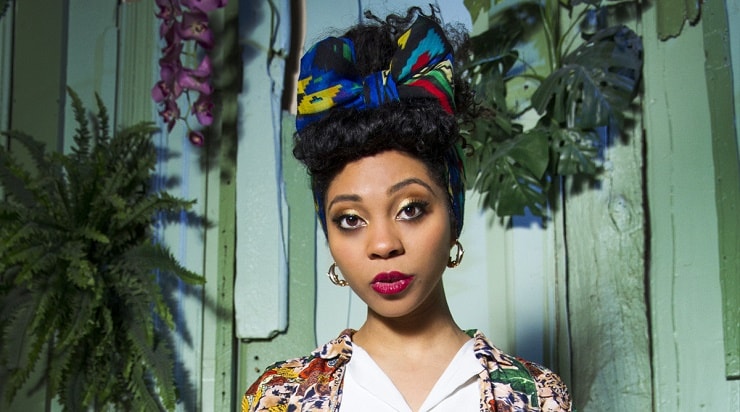 ‘Angel Fire’ sees Hollie’s first collaboration with famed producer Martin ‘Youth’ Glover (U2, Guns N’ Roses, Paul McCartney, The Verve) who expertly echoes Hollie’s dulcet tones with equally soothing and infectious sounds. Youth on their recent collaboration: “I’m very honoured to work with Hollie, one of the most exciting emerging singers and writers over the last ten years. Hollie combines seductive and wistful melodies, underpinned with some sharp lyrical observations and clever word play combined with an exquisite and informed pop sensibility… It was a pleasure to work with an artist with such high-caliber criteria and vision.” Hollie Cook was born and bred in West London in a household dominated by music – with Sex Pistol Paul Cook as her dad, music was always around – and she gravitated to the sounds of Marc Bolan, David Bowie and The Cure. Family friend and Slits singer Ari Up persuaded Hollie to sing backing vocals for EP ‘Revenge of the Killer Slits’, which she followed by ditching school to join the band on a six-week tour.

Hollie’s previous albums ‘Hollie Cook’, ‘Hollie Cook in Dub’ and ‘Twice’ have all received critical acclaim from many and resulted in being on an array of ‘Top Album’ lists via Esquire, Echoes, Mojo, The Mirror and Rough Trade. Whilst over at radio the singles from each album were consistently making waves – gaining heavy support from BBC Radio 1, BBC Radio 2, BBC 6 Music, BBC 1Xtra and Radio X, with notable highlights in the form of a live Maida Vale session for Radio 1’s Huw Stephens and a Later… With Jools Holland performance on BBC 1. Hollie, a captivating performer, alongside her live band General Roots are festival favourites and have played to raucous crowds at Boomtown, Rototom, V, Beautiful Days and Glastonbury. Cook has recently played support slots for The Skints, Jamie T, Protoje and The Stone Roses. With Hollie’s natural lyrical flair and vocal purity, combined with Youth’s tight and experienced production, ‘Angel Fire’ lays the foundations for Hollie and her maturing sound to re-emerge as a real one to watch this year.