As box-fresh an act as you’re likely to find, Harker Moon were formed only in 2017 by a set of reunited and like-minded musical school friends hailing from Kentish Town in North London. The lads’ proximity to the musical hub of Camden not only gave the band the opportunity to cut their teeth in some world-famous small venues but also access to a whole swathe of visiting musicians and their varying styles. This could account for Harker Moon’s hard-to-pin-down vibe, which, while certainly displaying touches of Kings of Leon’s melodic bombast and Arctic Monkeys’ gritty indie drama, also borrows funk licks, jazz riffs and rootsy intensity, not least from the poignant laments of the blues. 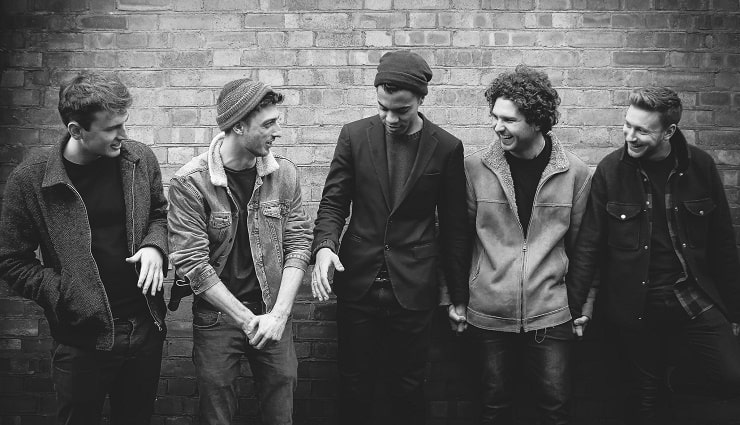 Leading an ensemble comprising Hal Briggs (bass), Ben Phillips (drums), Joe Caplin (keys) and Olly Jay (lead guitar), vocalist and rhythm guitarist Tommy Down honed his voice as the lead in the University of Bristol’s jazz band where he developed a style that has since been described as a triumphant blend of Paolo Nutini and Alex Turner. The band’s fiendishly hooky rock’n’soul anthems for our times have won them a dedicated fan-base over their numerous live shows – fans who have begun to express their frustration at the absence of any recorded material. They can now rest easy: Harker Moon’s debut single ‘Muma Says’, out this November, is an outstanding introduction to a set of equally ear-catching straight-out-the-studio songs coming your way over the course of this year.

“The story of ‘Muma Says’ begins at a point of recollection: the narrator harks to his past and warns the listener not to make the same mistakes in love that he did.” Tommy Down, frontman, Harker Moon

Bearing a clear-cut message – cherish the one you love – ‘Muma Says’, the debut single by young London quintet Harker Moon, is not only a song of beautiful intent but of beautiful execution too. This brassy indie-soul swinger finds a spacious, subtle union of piano, guitar and bass enveloping a hypnotic 6/8 drum groove, resulting in a track with the sultry ambience of a Sixties Stax classic, the pop nous of the Motown songbook and the climactic dynamics of a modern-day indie anthem. Completing the picture is Tommy’s raw-throated and impassioned vocal, reminiscent of timeless soul stars including Al Green and Marvin Gaye, as well as more contemporary artists such as D’Angelo and Daniel Caesar. Though there is a certain melancholy in Tommy’s delivery that mirrors the emotive melody lines of piano and guitar, ‘Muma Says’ ultimately exudes positivity and hope, a belief in good times and better tomorrows. Tommy explains: “The happy and nostalgic themes of the song echo the temperamental world we live in but are intended to leave the listener feeling hopeful for the future.” And given the power of ‘Muma Says’, we’ve got the feeling that Harker Moon have every reason to feel hopeful for the future.