Half Moon Run is a talented young trio from Ottawa, Ontario and Comox, British Columbia. It was in a studio situated in Montreal’s Mile-End district, through the hardships of time constraints and flatlined bank accounts, that the trio bonded and created their unique sound, fusing together the restless elements of indie, pop and folk with beautiful rhythmic harmonies, delicate guitar lines and a hint of warm electronica. Aged 21-25 years old, but armed with solid training and raw talent, they mix and combine their different musical backgrounds. Their complex arrangements, inspired by both classical and modern composers, are particularly surprising to hear and see during their live shows. Devon Portielje’s remarkable voice is beautifully backed up by Connor Molander and Dylan Phillips. Phillips often plays drums and keys simultaneously as Molander and Portielje shuffle between guitar, keys, samplers, and percussion folky three-part harmonies hold down moody, psychedelic arrangements and electronic-infused soundscapes. Although together for less than two years, the band has quickly caught the ear of programmers and tastemakers. The trio wowed audiences at SXSW, CMW, M for Montreal and Great Escape, and were proclaimed “Buzz Kings Of The (M for Montreal) Festival” by NME. 2012 kicked off with the launch of their debut album “DARK EYES” on march 27 in Canada, entering right away into Canadian charts. After a dozen succesful dates in Canada, the band embarked on a marathon. 32 gigs in 32 days tour in Europe, including festivals in France, Germany and The Great Escape in the UK, creating a huge buzz with fans and industry alike. They are currently on tour across Canada and will play summer festivals like Osheaga and Quebec city summer festival, before heading off for a second run to launch the album in Europe and Australia at the end of the year. 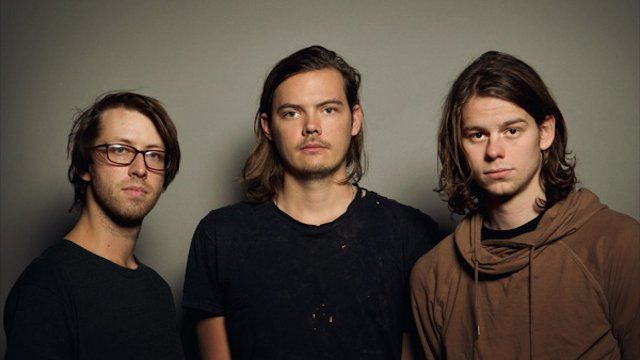