Grow Home Trainer. Grow Home is an adventure platform video game developed by Ubisoft Reflections and published by Ubisoft. It was released on February 4, 2015 for Microsoft Windows. The game follows a robot named B.U.D., who is tasked with growing a plant that will oxygenate its home planet. Players explore an open world, controlling B.U.D.’s movement and using its arms to climb and interact with objects. Initially developed by a small team based in Ubisoft Reflections for internal release, it became popular between co-workers and was eventually planned for official release. It received favorable reviews upon release. Grow Home is an adventure game played from a third person perspective. Players control a robot named B.U.D. (Botanical Utility Droid), and are tasked with oxygenating its homeworld by growing a “Star Plant”, a giant beanstalk, and harvesting its seeds. Players are able to freely explore an open world, and have the ability to individually control B.U.D.’s hands and grab onto any part of the environment, which can be used to push and climb objects. The game allows players to grow “Star Shoots” from the “Star Plant”, which act as platforms for the player to traverse. Their path of growth can be directed by the player, and can be used to carry the player to various floating islands.Some islands, called “Energy Rocks”, can be connected to “Star Shoots” to make the “Star Plant” grow higher. Power-up crystals can be collected to provide B.U.D. with extra abilities, and are scattered throughout the game world. Creatures and other plant life can also be found throughout the game, as well as environmental features, such as caves and water currents. Some parts of the environment, such as leaves that grow off of both the “Star Plant” and “Star Shoots” and allow the player to jump to greater heights than normally possible, can affect how the player moves throughout the world. Teleportation pads allow the player to move around the world quickly and act as save points. Items can be picked up by the player and stored in B.U.D.’s backpack, such as flower parachutes that make the player fall more slowly towards the ground, and leaf gliders that allow the player to travel much further through the air. Only one item can be carried at a time. Wikipedia®. 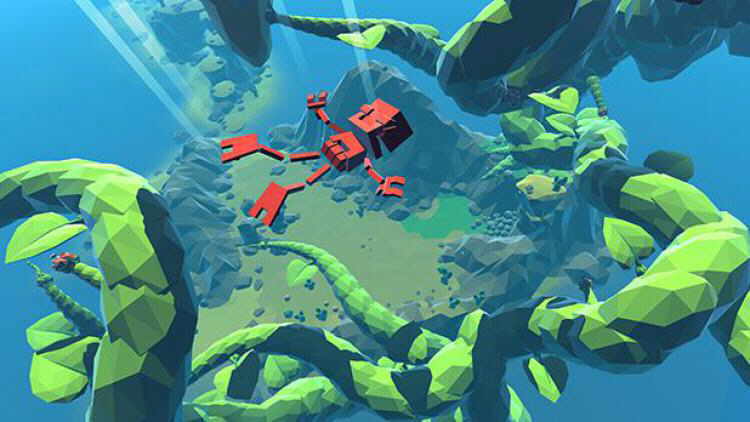 Grow Home Trainer (+5) Options:
Trainer for the game Grow Home, you can use it to activate these essential Cheat Codes: Super Speed, Super Jump, Activate Float Mode, Float Up, Float Down. Note: This cheat tool is for the original version v1.0 of the game Grow Home.