Last year, IBM released a report about the way marketing officials at major corporations are using the Internet. Though the gist of the study concluded that these high-paid administrators weren’t using it very well, the October release actually hinged on a much more intriguing and intimidating fact: “Every day we create 2.5 quintillion bytes of data—so much that 90 percent of the world’s data today has been created in the last two years alone.” We simply can’t keep up. Whether it’s the deluge of MP3s that flood the Internet daily, the information that companies collect about the purchases we make, or the photos of family pets and weekend meals our friends load onto social networks, the worldwide swell of data is best managed by supercomputers and servers, not the people who, in essence, manufacture and depend upon it. It’s hard to resist the temptation of this ever-accelerating cycle—to create and release quickly, so that the world’s bytes don’t leave you behind. But Shields, the fourth and most fluid album by Grizzly Bear to date, slyly defies that trend. True, the quartet of Chris Bear, Ed Droste, Daniel Rossen and Chris Taylor have never made a quick follow-up; it took them three years to get from Horn of Plenty to Yellow House, three more to get from Yellow House to Veckatimest. Between those records, though, they’d not only toured but issued singles and splits, EPs and remixes. After long spans of shows for Veckatimest, however, Grizzly Bear went silent, or, to be more exact, its members lived their own lives. Trips were taken, and friendships were restored; families were visited, and solo projects were finished. The potential energy gathered in tour vans and busses, in studios and on stages for years was finally released, giving the individual band’s pieces the chance to recover and, after a year, return to being Grizzly Bear.

The quartet first reconvened last summer in Marfa, Texas, with the loose plan of rehearsing and demoing new material and seeing where potential songs for the next album stood. Almost nothing stuck, but that was fine. In Texas, they were reconnecting as friends and musicians, and the material would surely come. Against the inclination of the digital world, they took their time. “Clearly everyone had been in a very different space,” says Rossen, “so most of the Marfa time was seeing each other again, trying things and feeling each other out. We all had to meet each other again.” When they reconvened in January, again at the immortalized Yellow House in Cape Cod, they were anxious to return to Grizzly Bear. Indeed, Shields depends upon the urgency of a band whose members have opted back in. For the first time, they wrote more songs than they needed and scrupulously edited the ideas. For the first time, Rossen and Droste wrote songs together, taking each other’s ideas and extending them and executing them with a new vitality. And for the first time, they tended to move forward only with the songs that were most open to true quartet collaboration. Asked which tunes on Shields belong to which songwriter, every member balks and explains that, for the first time, these are actually full-band numbers. Both in process and product, this is Grizzly Bear as they’ve never been. “Sun in Your Eyes,” the seven-minute close to Shields, stemmed from a piano melody Droste wrote and discarded but that Rossen picked up as a pet project and spent weeks building, changing and rebuilding. The result is one of the most brilliant and audacious pieces of Grizzly Bear’s oeuvre, dependent upon the same mix of drive and drift that shapes the bulk of Shields. Though soft at the edges, “Yet Again” pushes toward the status of rock anthem, with a bridge that refracts dance beats through a musical kaleidoscope; the slow creep of “What’s Wrong” commands an answer, its antiphonal vocals and anxious strings giving voice to a frown and a sigh. Those open emotions are an integral part of Shields, the most cohesively written album of Grizzly Bear’s career. The words come matched by a sound that is more passionate than proper, a quality earned by spending less time on the perfect take than on the proper feeling.

Grizzly Bear – On a Neck, On a Spit

“This has a different energy behind it,” concludes Droste. “Veckatimest was a little more of a polite album; the desire to keep the vocals smooth might have kept a little distance between us and the audience. This one feels a bit more rough and exposed, so that on Shields, everything speaks for itself.”

Grizzly Bear – Listen and Wait Lyrics:
A joker inside, a Jumbo be re-brought to life
and it’s gone by the night,
the morning brings it back – gave back

Set towards the light imagine fades
the vision running wild
hiding the ?? a better face smiles shinning light
Listen and wait to the voice that calls you on

?? find your best way home
blinded, blind sided by self
bending from that home you always loved, so far

down on the clouds,
dreams nothing much
stay where you are,
no one could know

Set towards the light, imagine fades
vision running wild
hiding the ?? a better face, smiles shining light
Listen and wait to the voice that calls you on 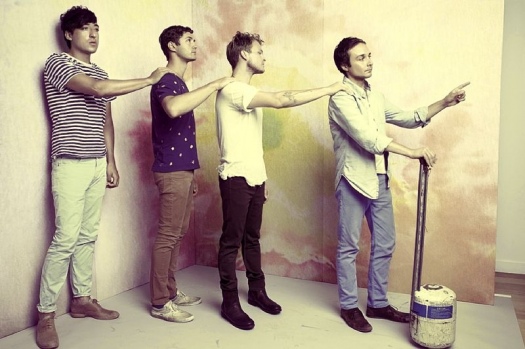