FIFA 14 is a sports football simulation video game developed by EA Canada and published by Electronics Arts. It was released in late September 2013 for the PlayStation 2, PlayStation 3, PlayStation Portable, PlayStation Vita, Xbox 360, Wii, Nintendo 3DS video game consoles and Microsoft Windows. It was also released as freeware for iOS and Android on 23 September 2013. The game is set for release on PlayStation 4 and Xbox One in November 2013. A new engine called the Ignite Engine will be used in FIFA 14 on the PlayStation 4 and Xbox One versions only. This features both graphical and game-play changes such as human intelligence to make players react more like the real thing, True Player Motion to create more realistic movement from the players and more realism to the way environmental features like weather and stadium crowd dynamics develop during play.[6] A PC port of the version with Ignite Engine was in the works, but eventually it was cancelled. In FIFA 14, experience the world of football with over 60 stadiums, including 32 real-world venues, with new additions including La Bombonera in Buenos Aires, Argentina, Goodison Park; England’s first purpose-built football stadium[15] and the Donbass Arena in the Ukraine, home of Shaktar Donetsk, in addition to the return of Barcelona’s Camp Nou, which was removed from FIFA 13 due to licensing reasons. Wikipedia®. 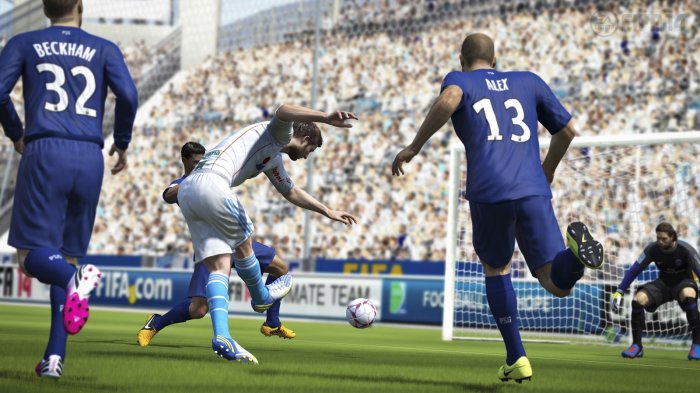 FIFA 14 Trainer (+9) Options:
Trainer for the football simulation game FIFA 14, you can use it to activate these essential cheat Codes: Infinite inital transfer, Career manager, player fatigue, funny tricks. Note: This cheat tool is for the original version v1.3.0.0 (update 2) of the game FIFA 14.