Far Cry 5 is an action-adventure first-person shooter video game developed by Ubisoft Montreal and published by Ubisoft for Microsoft Windows, PlayStation 4 and Xbox One. It is the eleventh installment and the fifth main title in the Far Cry series. Similar to its predecessors, Far Cry 5 is an action-adventure first-person shooter set in an open world environment which the player can explore freely on foot or via various vehicles. Unlike previous titles in the series where the player takes on the role of a set character, the game will feature a new character creator, which the player can use to customize their character’s appearance. The player will have a variety of ranged and explosive weapons to fight against enemies, while the game will place a renewed emphasis on close-quarters combat compared to previous Far Cry titles by introducing a wider range of melee weapons. 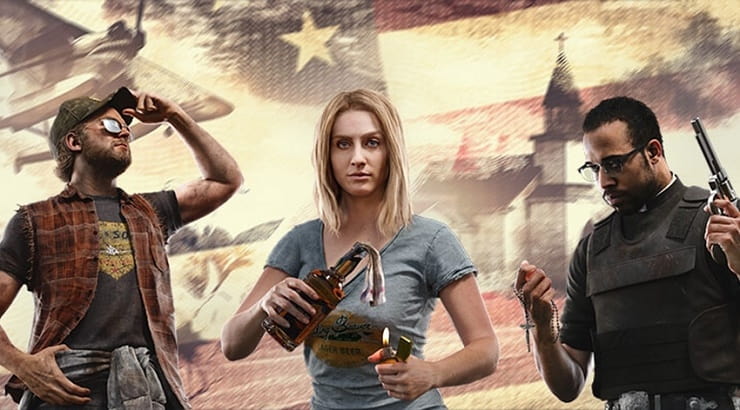 Far Cry comes to America in the latest installment of the award-winning franchise. Welcome to Hope County, Montana, land of the free and the brave but also home to a fanatical doomsday cult known as Eden’s Gate. Stand up to cult leader Joseph Seed, and his siblings, the Heralds, to spark the fires of resistance and liberate the besieged community. FIGHT AGAINST A DEADLY CULT
Free Hope County in solo or two-player co-op. Recruit Guns and Fangs for hire to help defeat the cult. A WORLD THAT HITS BACK. Wreak havoc on the cult and its members but beware of the wrath of Joseph Seed and his followers. CARVE YOUR OWN PATH: Build your character and choose your adventure in the largest customizable Far Cry game ever! DYNAMIC TOYS: Take control of iconic muscle cars, ATV’s, planes and a lot more to engage the cult forces in epic fights. RE-DEFINED STEALTH MECHANICS: Enhance your gameplay with eye tracking. Tag enemies by looking at them to increase your stealth skills and help your teammates spot threats. Compatible with all Tobii Eye Tracking gaming devices. Additional notes: Eye tracking features available with Tobii Eye Tracking.