Skip to content
Home » Music » Family of the Year – Hero

Family of the Year is an American indie rock band based in Los Angeles, California consisting of members Joseph Keefe (vocals/guitar), Sebastian Keefe (drums/vocals), James Buckey (guitar/vocals) and Christina Schroeter (keyboard/vocals). Their music uses melodic male/female vocal harmonies and folk tale-style lyrics. Though Family of the Year is currently based in Los Angeles, California, brothers Joseph and Sebastian Keefe were born in Massachusetts, spent their teenage years in Wales, and eventually moved to Martha’s Vineyard. James Buckey is from Jacksonville, FL, while Christina Schroeter is from Orange County, CA. Prior to forming Family of the Year, members Joseph Keefe and Sebastian Keefe enjoyed local Boston success in previous bands Unbusted and The Billionaires. Wikipedia®.

Most bands function like a family, seeing how touring, writing, and studio time force them to share a lot of small spaces for extended periods of time. But Family of the Year has taken that familial feeling a step further, and not just with its moniker. The members of the Los Angeles outfit have formed unbreakable bonds amongst themselves that come from cohabitating in a run-down house and relying on each other for inspiration and support, which has led to the kind of camaraderie that allows members to finish each other’s sentences. It also doesn’t hurt that frontman Joe Keefe and drummer Sebastian Keefe are real-life siblings. Not surprisingly, many of the group’s songs feature numerous voices, and more than a few include a chorus of joyous handclaps. Some even sound like they should be sung by the tight-knit group around the campfire while the s’mores are melting and the wine is flowing, especially the ones that name-drop members of the band. Guitarist Jamesy Buckey, in particular, has received the lion’s share of shout-outs in FOTY songs, to the point where it’s become a Family tradition. 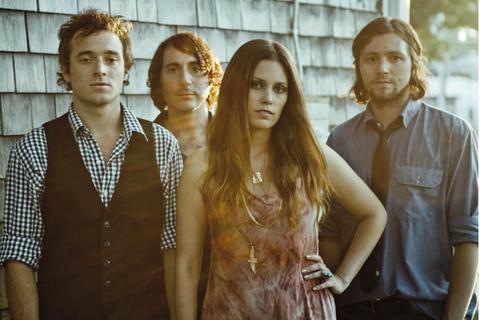