Too True is the third album by Dum Dum Girls, and was released January 22, 2014 in Japan, January 27, 2014 in Europe, and January 28, 2014 worldwide. The album marks the fourth Dum Dum Girls release in a row produced by Richard Gottehrer and The Raveonettes’ Sune Rose Wagner, and the fifth overall for Gottehrer. The album reached number 138 on the UK Albums Chart. Too True was compared to British alternative rock bands like Siouxsie And The Banshees, The Cure, The Stone Roses, Suede and The Jesus And Mary Chain. The production on the album features reverb in the sound and multiple layers of guitars. Dee Dee began to write Too True while touring for End of Daze and in November 2012 began to record the album at Pet Sounds at East West Studios in in Hollywood with Richard Gottehrer. However, Dee Dee soon realized her voice was damaged from touring which halted recording. During this break, Dee Dee re-wrote lead single “Lost Boys & Girls Club” and slowly recorded the vocals herself back in New York City. The song “Okay You Okay?” was originally written and intended for Ronnie Spector but Richard Gottehrer convinced Dee Dee to keep it for herself. Wikipedia®.

Dum Dum Girls – Too True To Be Good

I’ve tried to remind myself it’s gonna be fine
But when the day runs out into the night
And all the wait comes upon your mind – it’s hard to outrun
The devil from behind! 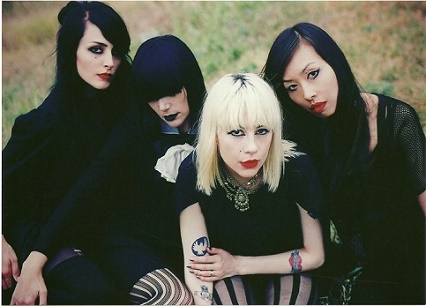